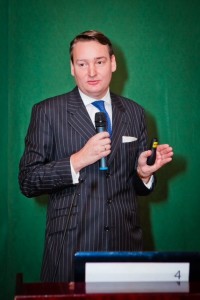 The day started with Oliver Schwede from invidis opening the event on behalf of OVAB Europe (he spoke about the basics of Digital Signage, the difference to DOOH and gave some examples from different vertical markets).

Oliver emphasised the importance of concepts and content and the necessity to embrace marketing people from the beginning of any project.

Intel’s Jose Avalos then presented Intel Proof of Concepts and AIM as a service that Intel is providing. Deniz Zeltser from Vivid Interactive followed (we saw him in Moscow back in May and he gave a really good presentation then as well).

Denis showed a whole bunch of interactive projects for well known brands – this was the only presentation during the day from an ‘agency’.

Dirk Huelsermann gave his usual excellent speech, this time with his NEC hat on and this time about VUKUNET. Dirk told us after “that VUKUNET got traction from various network operators from Russia and Ukraine” whilst he was in-country.

A number of local presentations then followed; RIA Novosti who provide news feeds and news clips to the DOOH industry and Digital Signage at KAMAZ Group from Mediavisor which was ostensibly about information displays in the production environment.

LG also gave some interesting insights into their KIA and Burger King activities. The last presentation of the day was from SV Softlab who build WayFinding systems using QR coded maps on iOS and Android in combination with Digital Signage.

The event was organised by Midexpo exhibition company and Integrated Systems Events and supported by OVAB Europe.

This entry was posted on Tuesday, November 8th, 2011 at 12:59 @582 and is filed under DailyDOOH Update. You can follow any responses to this entry through the RSS 2.0 feed. You can leave a response, or trackback from your own site.