In the past 24 hours we have heard of two new digital signage applications for men’s toilets. The first was the MOOH Group‘s DOOH Loo (see also our story about a ‘pee-controlled video game here‘) 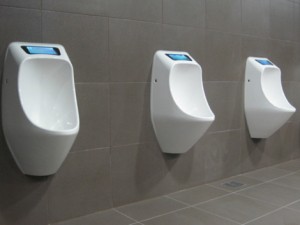 The DOOH loo consists of small screens located at the top of a waterless urinal called a Urimat.

This entry was posted on Friday, November 25th, 2011 at 01:00 @083 and is filed under Scuttlebut. You can follow any responses to this entry through the RSS 2.0 feed. You can leave a response, or trackback from your own site.