@AOpenEurope’s #AOpenForum attracted 150 registrations but the Belgian Stike (affecting the Thalys), the bad weather (especially in Italy) and no doubt that usual ‘sore-thumb’ ahead of a show, i.e. stand building affected the numbers slightly. 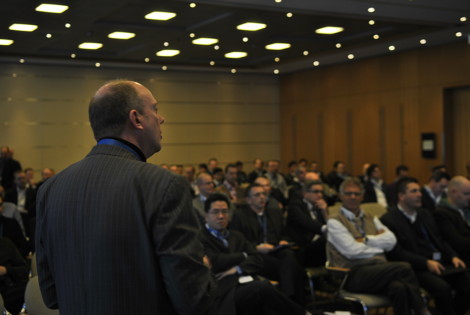 In the morning there were 93 people who listened to a number of AOpen executives in the morning (the flying geese video will long be remembered – trust me, in a GOOD way), Intel’s Sam Bellamy who gave one of the best Intel presentations we have sat through in a long time and of course, yours truly who was only given 30 minutes to give a brief ‘Twitter Masterclass’, a look back at 2011 and trends for 2012.

The afternoon saw the room split into two for breakout sessions and 107 people chose between the two different sessions; we sat in on a Microsoft Windows embedded presentation (quite interestingly actually), a good presentation from Bjorn at NDS and then a really techie session from AOpen on video tearing, EDID type stuff! 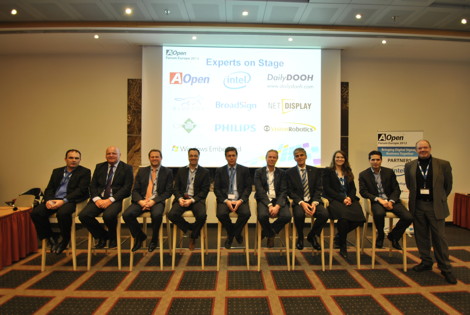 The last presentation of the day was a really good Q+A panel session .. I have to say it was really good because I MC’ed it but it was good. It was an hour long – there were loads of good questions (many thanks to all the Americans in the audience who helped make the session really interactive).

The day ended with some AOpen awards for best project (nice idea), drinks and dinner. Damned successful and a great deal of fun.

This entry was posted on Monday, February 6th, 2012 at 13:57 @623 and is filed under Scuttlebut. You can follow any responses to this entry through the RSS 2.0 feed. You can leave a response, or trackback from your own site.