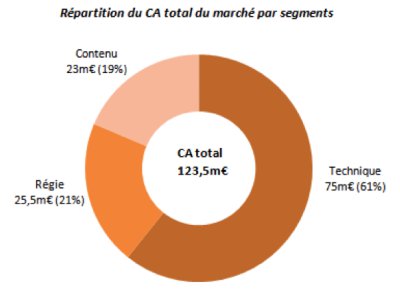 Of the €75M generated by technology, suppliers of screens and video projection systems represent €19M – other types of hardware represent €14M – while software turnover was €10M. Integration was worth €12M, followed by operations and maintenance (€9m), installation (€7M) and consulting (€4M)

Digital Media Association France President Marc Ballu, commented “this swing, which is due to networks installed either in high-impact locations or in very specialised locations (Paris underground, pharmacies, tobacconists) shouldn’t hide the fact that the large majority of advertising-based networks survive, almost exclusively from local advertising.”

In 2011, France was the third largest digital media advertising market, behind the UK and Germany.

Content creators and programmers provided 85% of revenue in this area (€19.5M), while suppliers of ready-made content (live feeds and video) made up the other 15% (€3.5M).

This entry was posted on Friday, March 30th, 2012 at 07:13 @342 and is filed under DailyDOOH Update. You can follow any responses to this entry through the RSS 2.0 feed. You can leave a response, or trackback from your own site.