Screenvision, a major innovator in cinema advertising and alternative content programming, is reinventing its popular pre-movie marketing platform with the launch of The Limelight, a 2-screen configuration involving both the big screen and mobile, 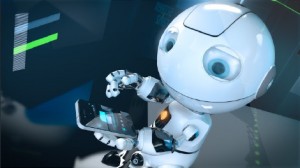 The re-engineered in-cinema advertising pre-show will enable advertisers to fully capitalize upon mobile interactivity and social connectivity with their ad buys coast-to-coast. The new 20-minute pre-movie content has also been re-engineered to provide a more impactful environment for the rapidly expanding universe of long-form content which helps brands deepen their narratives and relationships with consumers.

The free screenfanz mobile app is now available in the iTunes store, with a companion website. The app will be available for Android within a few weeks. Benefiting both consumers and marketers, it provides movie-goers with comprehensive movie information, the chance to check-in at theatres, share their reviews via Facebook, participate in trivia, accrue social status and points via in-app behaviors and have a chance to win prizes including movie tickets and concession cash.

The Limelight is not only breaking ground with its 2-screen, interactivity-centric implementation, but a reinvention of the modular flow of its 20-minute big screen presentation. The new program is designed to help brands use the immersive and impactful forum of the darkened movie theater, and its big screen, to engage in longer-form storytelling, brand messaging and narratives, ones that can unfold in multiple parts and be shared via social media.

“Our new pre-show brings together the immersive power of advertising on the silver screen with rich mobile interactivity, a marriage that will transform consumer engagement in the theater environment,” says Travis Reid, CEO of Screenvision. “The Limelight will make movie-going more fun and involving for the audience, giving them a reason to arrive at the theater early and switch on their mobile devices to play trivia and share movie activity with Facebook friends, earn points and prizes, and much more.

“For advertisers, it will make marketing a much more creative, cost-effective and immediate impact proposition, be they national, regional or local brands, choosing to involve consumers via mobile interactivity or long-form branded narratives. This integrated platform fuels the creation of earned media across a very socially-connected consumer group, like no other.”

“In today’s fragmented, short-attention-span media universe, commercial friendly environments are an endangered species,” says Mark Mitchell, Screenvision’s chief revenue officer who also serves as president of The Cinema Advertising Council. “At the same time, brand storytelling is more essential than ever. To truly bond with consumers, brands need a forum where they can deliver their message in long-form to an immersed, undistracted audience. This is something that The Limelight is uniquely designed to deliver.”

As part of the re-engineering of the pre-movie programming, Screenvision produced a ’pilot’ of the new show complete with local, regional and national ads featured within the context of the new branding and consumer messaging. Screenvision partnered with several national advertisers including FedEx, Nestle Purina PetCare Company, and Allstate among other advertisers to test several components of the new format, including longer form video and customized mobile interaction. These key brands who participated in the Limelight pilot research delivered 54% unaided ad recall, with nearly half intending to purchase these brands in the next year.

Screenvision collaborated with Ipsos OTX MediaCT worldwide motion picture group on multi-phase research during the pilot to tailor and support the new mobile and long-form content centric pre-show, both qualitative and quantitative.

The results, among a nationally representative sample of 640 movie-goers, demonstrate this tech-savvy group, 76.1% of whom own a smartphone, is more than ready to ‘go mobile’ with it during the time before the feature presentation. More than three-quarters said they would ‘definitely’ or ‘likely’ arrive at the theater earlier to watch more of the pre-show entertainment and participate in trivia, check into theaters, write reviews, play games and other behaviors to have a chance to win prizes including movie tickets and concession cash.

The respondents nearly unanimously rated the Screenfanz app as ‘more all-encompassing’ than current movie app offerings and 65% said they would tell their friends about the service.

Screenvision’s expansive consumer reach and new engaging format makes it an enticing partner for organizations like the Ad Council and DoSomething.org, both premiering never before seen ads in cinema with Limelight. A new TV spot from the Ad Council and Dollar General Literacy Foundation‘s GED Achievement national public service campaign will debut in The Limelight through April 22.

“We are thrilled to collaborate with Screenvision on our GED campaign to ensure that all Americans have the opportunity to achieve their full potential in life by obtaining their GED,” says Peggy Conlon, president and CEO, Ad Council. “Partnering with Screenvision will help raise awareness of this important issue to millions of Americans by featuring our messages for the first time in cinema theaters.”

“Through our new partnership with Screenvision, the audience can learn stats about important social causes and use sms to sign up for more information and action opportunities while they’re waiting for the movie to start,” says Naomi Hirabayashi, director of marketing at DoSomething.org. “Buttery popcorn plus becoming a more socially conscious citizen? Double whammy.”

Ipsos OTX MediaCT research conducted with Screenvision’s The Limelight pilot also demonstrated that nearly nine out of 10 consumers (86.6%) welcome longer-form advertising in cinemas, a majority driven by men ages 30 – 39 (92.6%). They were particularly responsive to ads that featured humour, multiple parts with a cliffhanger and also ‘event-like’ spots, meaning ads that were made specifically for in-theater showcase, ones not seen before on TV.

The reinvention of Screenvision’s 20-minute pre-show begins with a new logo, graphics and color palette, one that complements the new name, The Limelight, as well as the clean, functional design aesthetics that are the standard for web and mobile services. In contrasting shades of cool lime green, the new logo is also three-dimensional and two-part, with the upper and lower portions of the Screenvision ‘S’ functioning as independent visual units for animation and video, in theaters, on the web and mobile.

CMOR, the popular robot host of Screenvision’s pre-show since 2010, has also received a modern makeover. He has emerged with a sleek, clean, airbrushed style, one in line with the design of the mobile device he wields in the 20-minute pre-show to familiarize and guide consumers through the in-theatre offerings and other information.

To facilitate understanding and immediate use of the many mobile-driven offerings, Screenvision’s design team has created over two dozen customized icons, ones which consumers can use to jump to chat, trivia, awards, the theater concession menu and much more.

The strategy behind the comprehensive re-engineering of Screenvision’s in-cinema pre-show, and its new screenfanz app and companion website was developed by Lee Heffernan, Screenvision’s senior vice-president marketing and Lee Hunt. Hunt is the award-winning creative services veteran responsible for the branding of many of television’s most successful brands, including Lifetime, VH-1, TNT and E!. Heffernan and Hunt have worked together since the early ’90s on numerous television brands. Their creative vision was brought to life by loyalkaspar, whose recent network branding credits include AMC, Current TV and Cloo.

“When I first joined Screenvision, I saw the incredible marketing and branding opportunity to create an interactive pre-movie experience,” says Heffernan. “With their combined experience in strategizing strong brand positioning with equally distinctive visual images, I thought Lee and loyalkaspar were the right team to bring to life a vision and environment that could truly resonate with, and more importantly, entertain American movie-goers.”

The Screenvision cinema advertising network is comprised of over 14,300 screens in more than 2,350 theater locations across all 50 states and 94% of DMAs nationwide; delivering through more than 150 theatrical circuits, including 10 of the top 15 exhibitor companies.

This entry was posted on Thursday, April 12th, 2012 at 10:00 @458 and is filed under DailyDOOH Update. You can follow any responses to this entry through the RSS 2.0 feed. You can leave a response, or trackback from your own site.