Augmented reality, gesture reactive walls and advertising markers that seem to bring dinosaurs to life are all part of anew exhibit which premiered June 23 at the Royal Ontario Museum [1], Toronto.

The world premiere of Ultimate Dinosaurs: Giants from Gondwana, presented by Raymond James Ltd. [2], one of North America’s leading full-service investment dealers, features some of the largest and most unusual dinosaurs from the Southern hemisphere. The exhibit, curated, designed and produced by the ROM, is making its first stop in Toronto before embarking on an international tour. 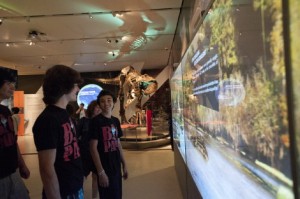 [3]Ultimate Dinosaurs features cutting edge Augmented Reality experiences, used in creative ways to bring these specimens to life as never before. The ROM is the first Museum in Canada to use augmented reality on such a creative scale. Other innovative technologies are used in the exhibition to illustrate the story of how a dynamic Earth with drifting continents affected the evolution of dinosaurs, from a Southern perspective. 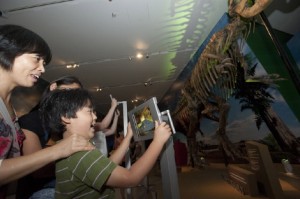 [4]And towards the end of the exhibition, visitors become part of a reactive AR experience, as two large digital murals depicting dinosaur habitats react to visitors’ motion, inviting them to stop and explore life like a dinosaur. As you approach the walls, the dinosaurs react to you, changing as you get closer and closer. 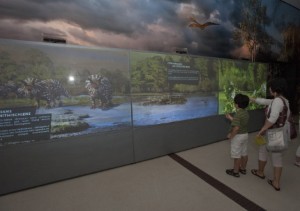 [5]Among other interactive experiences during the exhibit, there is a multiplayer game using a large screen and an iPad whereby users see the continental drifts.

The ROM worked closely with Meld Media [6], a Toronto-based integrated production studio, to incorporate all the AR and other interactive facets of the exhibit.

[…] that allow users to visualize how the dinosaur would have looked fleshed out and moving, and reactive wall displays that incorporate motion sensors to selectively animate plant and animal components of the murals as […]