We’ve been covering the Strategy Institute [1] Digital Investor Conference [2] for several years and each one gets better than the year before (and that’s before Adrian Cotterill, our own DailyDOOH esteemed editor-in-chief, got involved as co-chair along with Steve Nesbit, managing director, Prestonwood Trail Holdings). 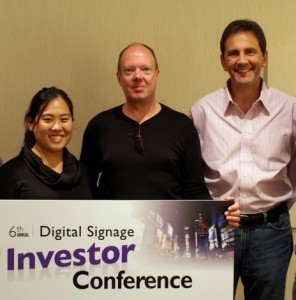 This year’s agenda looks like it will be the best ever, with solid talks from experienced, knowledgeable executives rather than a series of panels with panelists debating topics (often) among themselves.

Just hearing how PRN [4] sees the industry and itself moving forward, and hearing from the well-known but not-often-seen Bill Gerba [5] should be worth the price of admission alone.

But there are lots of great speakers – yes, including investors – and topics lined up, and I’m sure there’ll be lots of opportunities for questions.

Day One will end with a cocktail reception allowing attendants to meet and mingle. (And you’ll notice that, on both days, there is no luncheon speaker, allowing delegates to mix and mingle.)

Day Two again has an exciting lineup including several investment executives – sure to attract and interest attendees from both large and start-up companies:

The final session is a Peer-to-Peer Debate session on ‘Identify Key Factors to Help You Develop a Roadmap to a Successful Digital Signage Venture’.

This a unique session where attendees will discuss numerous perspectives and experiences on such topics as revenue models, fundraising, investments and more, and then will nominate one person from each table to share the findings with the rest of the delegates. This should be fun and spirited with some serious findings that should help all delegates learn.

This two-day Investor conference will take place Oct. 17 and 18 at the Hilton, New York, and is part of an exciting week, not to be missed, that will also include the Digital Place-based Advertising Association [6] Digital Media Summit and several other to-be-announced events.

‘Creating the Framework of a Successful Merger to Drive Growth and Value for Investors’ – Since when a merger where all workers are laid-off is a good merger?