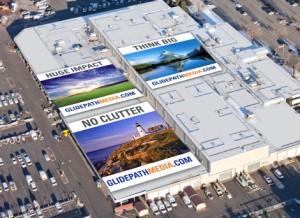 The owners of Glide Path Media spent two years researching the flight paths for each of 100 airports, done with the help with a well known flight simulation company, as well as researching all buildings in those flight paths that are large enough and sturdy enough to support the advertising structure. A real estate company is helping the company secure 10-year leases with building owners.

President and founder of Glide Path Media is Peter Schissler, who is also the owner of Orca Direct Communications, a direct marketing agency, and who has 25 years experience in consulting, direct marketing and advertising.

This entry was posted on Thursday, September 27th, 2012 at 11:56 @539 and is filed under DailyDOOH Update. You can follow any responses to this entry through the RSS 2.0 feed. You can leave a response, or trackback from your own site.