Why Innovation Itself Must Be The Next Big Thing

Last week I had the privilege of speaking in front of almost 300 people at the Taiwanese Digital Signage Multimedia Association’s (DSMA) annual forum during COMPUTEX TAIPEI. 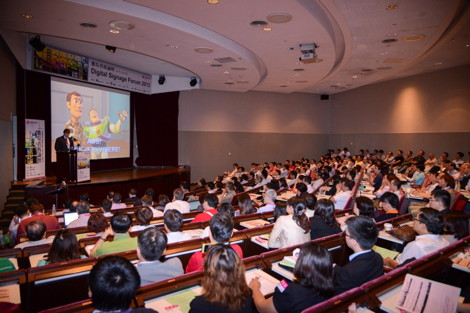 I was not alone in speaking of course, and the DSMA (mainly I think, due to the efforts of IAdea’s CEO John Wang) had managed to secure a particularly good speaker line up, err well with the exception of Intel who (a) as usual had nothing useful to say on the subject of digital signage and (b) didn’t even turn up for the speakers’ networking dinner the night before.

Here, in agenda order are some of what was said…

Overall, the DSMA managed to get almost 300 people together. It was an excellent morning’s event and for me personally well worth flying 6,000+ miles to attend.

±In my presentation deck I forgot to credit Andreas Souptonuts and Bob Rushby, from whom I ‘borrowed’ slides from their Thought Leadership Summit so let me do that now.

This entry was posted on Sunday, June 9th, 2013 at 13:11 @591 and is filed under DailyDOOH Update. You can follow any responses to this entry through the RSS 2.0 feed. You can leave a response, or trackback from your own site.