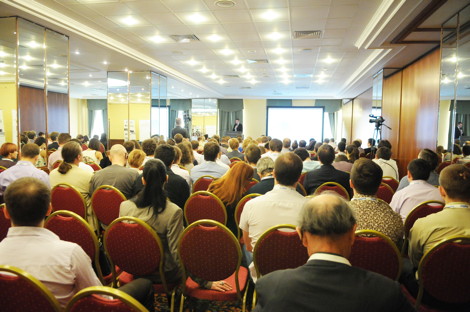 The conference itself was opened by Florian Rotberg, who gave an update on the European DOOH industry. Nikolay Alaev, Business development director from DigiSky, then spoke specifically about the Russian DOOH industry whislt Commercial director of DigiSky Ukraine office Viktor Korobko then added to Mr. Alaev’s presentation with real examples of using Digital Signage in restaurants.

Pavel Pochtenov, Head of intellectual media systems department with the Croc company, gave a very interesting presentation, glancing into the future and demonstrating how Augmented Reality and 3D technologies can be used in today business.

Rod Wardle, Vice-President of Yesco Electronics, Kai Thaesler, Managing director of Stroeer Digital Media and Natalja Boehm, Area Sales Manager CIS at Scala all explained in their presentations how digital technologies influence brand image, how to attract client’s attention, and how to reach a target audience.

Grigoriy Rabinovich, Marketing manager at Subway and Olga Narozhnaya, Marketing communication director at COLIN’S, shared their experience in using Digital Signage technology, and elaborated on the problems they faced and discussed their plans for the future.

Vladimir Kozlov, CEO at DigiSky group summed up the feelings of all who attended when he said “Three years ago this conference was created as a platform for those who are interested in Digital Signage and want to know more about it”.

He added “The popularity of this third conference shows us just how valuable it has become for the industry.”

This entry was posted on Monday, June 24th, 2013 at 10:44 @489 and is filed under Scuttlebut. You can follow any responses to this entry through the RSS 2.0 feed. You can leave a response, or trackback from your own site.