One of the cornerstones of #DpbMedia week, The Digital Place-based Advertising Association’s sixth annual summit which takes place Tuesday, Oct. 22 at the Hilton New York is this year entitled ‘Video Everywhere‘ and will explore ways to integrate place-based media with the rest of the evolving media landscape. 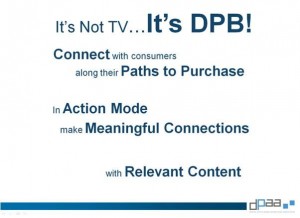 Back to Out of home video again?

DPAA president and CEO Barry Frey told us “With the advent of mobile, tablets and the Web, planning and buying are no longer tethered to television alone. Consumers are encountering video content everywhere; out of home, in specific venues and on the go”.

Not only will #DpbMedia week, this year, have an upfront (it will likely have two) AND there are a number of events happening in the meatpacking district [2].