The Welsh Are Coming 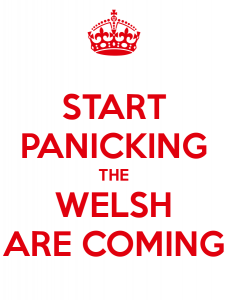 What is also evident is the global nature of attendees and of course the event itself. I see tables representing Belgium, Canada, France, Germany, North America and I would say most importantly, Wales.

The Welsh are known for their truly global presence; just ask the Welsh speaking group of settlers who arrived in 1865 in Patagonia, South America – you might not understand their response but yes, that is Welsh they are speaking.

Here in Wales we have the longest place name that holds the title of the longest URL in the world† – and no I don’t know how to pronounce it either.

Did I mention Rugby? Invented by the Welsh (not true, Ed††)… DailyDOOH’s English readers will fondly remember the final game of the 2013 Six Nations Tournament which the Welsh won. Again. If you have forgotten how we did that then, especially for the English Rugby fans attending next week, see ‘The Story of How Wales Won the RBS 6 Nations‘ here.

And this, a global hit single released a few years ago, all about that well known city that never sleeps, Newport.

Having said all of that, my team and I at Amigo and our guests Alchemy Expo Ltd and clients are looking forward to a great night out in London next week – Iechyd Da!

This entry was posted on Friday, November 22nd, 2013 at 10:41 @486 and is filed under DailyDOOH Update. You can follow any responses to this entry through the RSS 2.0 feed. You can leave a response, or trackback from your own site.