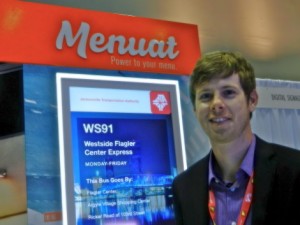 Such are some of the smaller exhibitors we met at #2014Sign Expo. One is Menuat, a year-old Jacksonville, Florida-based company led by an enthusiastic Jeff Charette, founder and CEO who built Manuat’s software management system.

Another first time exhibitor at #2014SignExpo was Crunchy Tech, a seven-year-old firm in Orlando, Florida. This company seems to have its hand in many pies, doing both events and permanent installs.

“We’re into any environment,” said Adi Khanna, CFO and part owner. “We work with various partners like Samsung, but have our own software management system. We do large screens, videowalls and touch screens. We can put iOS on a large touch screen.”

Another first-time exhibitor that we spoke briefly to at #2014SignExpo was Eureka! Media. El Paso, Texas, which began in advertising in 2001, started in digital five years ago, and has also been a sign manufacturer since 2011. It did the digital signage for Wendy’s in Mexico and Little Caesar’s in Phoenix and in California. Ernie Koury, president, said that the company is a total solutions provider, including content.

Swedx America was also there, with a single side 46” stand called The Blade. The company, which also does video walls, refers to The Blade as ‘the world’s thinnest kiosk. Swedx is trying to break into the North American market with partners under the Swedx America and Swedx Canada brands.

This entry was posted on Tuesday, April 29th, 2014 at 10:00 @458 and is filed under DailyDOOH Update. You can follow any responses to this entry through the RSS 2.0 feed. You can leave a response, or trackback from your own site.

2 Responses to “#2014SignExpo The Little Companies”