Urban Media’s (Airport Express Coach) screens already show news, weather forecasts and advertisements and so you would have thought that it was OBVIOUS that flight information was next or already there!!! The key of course is to have it in real-time (no point you sitting on the bus thinking you have plenty of time to catch your flight when you may not have). 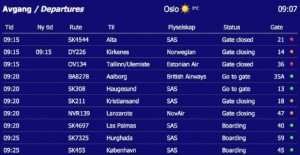 Anyway now travelers on SAS Flybussen can see all flights for the next 3 hours out, as well as whether the flights are on schedule, and if not, the new departure time AND of course from which gate the flight leaves.

Einar Linge Schwaiger, founder of Urban Media AS told us “Being able to see on the screen aboard the bus that the flight is 20 minutes delayed and at the same time find out which gate the flight leaves from can be liberating for those who are a bit late”

Per Kristian Aspelund, operations manager of SAS Flybussen Oslo added “There’s no doubt that being certain that you have plenty of time, boosts travel comfort. On the other hand, lack of time is perceived by the passenger as an uncomfortable stress factor, and that’s the uncertainty we wish to reduce.”

The project is a cooperation between Urban Media and SAS Scandinavian Airlines Systems. The software developer EPSYSmade the actual information solution.

This entry was posted on Friday, March 20th, 2009 at 14:04 @627 and is filed under Scuttlebut. You can follow any responses to this entry through the RSS 2.0 feed. You can leave a response, or trackback from your own site.