Whilst we shamelessly copied the concept of having a ‘Genius’ at The DailyDOOH Investor Conference from a certain Apple store, we still haven’t seen any other event of note, borrow this idea.

It is of course, all in the name of having (more) experts in the room who can help with Q&A and get decent conversations started.

At this year’s DailyDOOH Investor Conference we are proud to announce that we have three new ‘Genii’ joining us, namely: – 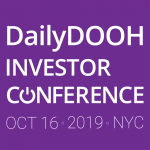