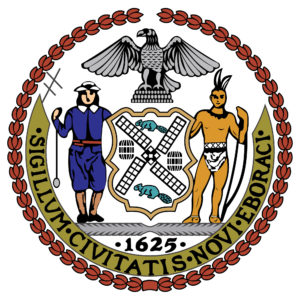 Now in its tenth year, New York Digital Signage Week [1] is where leaders and key players involved in Out-of-Home Advertising and Digital Signage gather from across the world to build valuable connections, share their knowledge, and learn more about the trends, challenges, and technological advancements that are shaping the future of their industries.

Mayor Bill de Blasio said “I applaud everyone associated with this terrific event for their efforts to strengthen our dynamic media landscape and engage and inform New Yorkers of all backgrounds. Together, we will restore our city’s cultural and economic vitality and come back from this crisis stronger and more united. On behalf of the City of New York, I offer my best wishes for an inspiring week and an enjoyable stay for all of those visiting the five boroughs for this vibrant convention.”

New York Digital Signage Week, loosely modeled on the New York Fashion Week concept, started 10 years ago when the Ministry of New Media suggested coordinating a number of autumn events in New York alongside one of its own longstanding events, the DailyDOOH Investor Conference (now in its 15th year). Running a number of conferences with a common thread of Digital Signage in the same week makes it easier for out-of-town delegates to travel and attend several events during the same trip and what started out as a convenience for domestic attendees soon attracted the attention of international visitors by the same logic. Within a few years New York Digital Signage Week had dozens of events being advertised and at the time of the last week, October 2019 it had developed into a full five day program of 40 events attracting some 5,000 visitors to the city.

Adrian Cotterill, Ministry of New Media co-founder and organiser of the week said “We are extremely grateful to the Mayor for his support. Over the years we have strived to develop a forum for everyone associated with the Out of Home (OOH) Advertising industry to share knowledge, exchange ideas and above all to network, with the joint aims of improving their skills and increasing the potency of the industry as a whole. After 18 months of Covid19-enforced isolation, we are feeling a swell of interest, as frustrated executives are keen to get out and engage in face-to face meetings once again.”

This year’s DPAA Video Everywhere Summit [2] will feature an in-person event (October 12) with brand leaders from Walgreens, American Express, Burger King, Unilever, Clorox, Vice Media, MilkPEP and more followed by a two-part Global Broadcast of the content on October 14 and 15 which will include additional speakers and extras.

Barry Frey, President & CEO of DPAA and organiser of the DPAA Video Everywhere Summit, the largest event of the week and one well known for delivering top brand CMOs, advertising agency CEOs, industry visionaries and business thought leaders said “This Mayoral message celebrating New York Digital Signage Week and welcoming attendees is a testament to the power of the week. New York City’s own story in the face of the pandemic mirrors that of our industry and collective perseverance in navigating the last 18 months. We look forward to a great event with major speakers and a little bit of surprise DPAA entertainment as always”.

This important week will enable advertising leaders and the global OOH Industry to connect, rekindle and make new relationships as well as inspire, delight, educate and inform all those in attendance.

The Ministry of New Media produces events and publications for the AdTECH, Digital Signage, LED and Out of Home industries. It holds events annually in London, Sydney, Singapore, Toronto, New York and Amsterdam [3]. Since 2010 it has been organising New York Digital Signage Week each October and more recently London Digital Signage Week annually in May. The company’s flagship event is the DailyDOOH Gala Awards, an exclusive black-tie annual awards ceremony held at the end of the year in London at Banqueting House (a Royal Palace) which recognises excellence and promotes best practice in the industry worldwide – an event that has become accepted as the sector’s only credible awards ceremony as well as one of the most important fixtures in the industry’s social calendar.

[4]The week will be the usual heady mix of FREE and PAID for events – conferences, showcases, cocktails, open house, breakfast debates, tours and other ad-hoc activities.