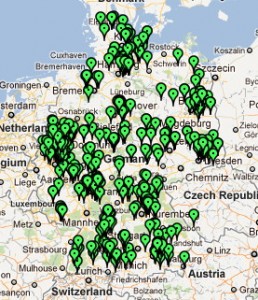 Amscreen did 500 Installs in less than 4 weeks!

Amscreen, the UK’s largest nationwide digital media network owner, announced that it was expanding to foreign shores [2] for the first time following a deal with BP Europe SE back at the end of July.

On the 1st December we noticed that they had reached five hundred (the current deployment total is a massive 514).

Amscreen CEO, Simon Sugar told us that deployment proper started in Germany on Thursday 3rd November 2011 and over the weekend we thought that surely, 500 installs in less than four weeks must be some kind of a record?

Well, not so according to our readers and we now have something of a leader board…

… (again) unless our readers know different!!!

2 Comments To "What’s The Fastest Rollout Ever?"

We installed 1,600 locations for the National Lottery in 6 weeks a few years back.

There was that great presentation at OVAB Munich in 2010 where a company (name redacted to protect the innocent) who presented on how fast they’d grown, to 10 LED screens across Europe in only 11 years…