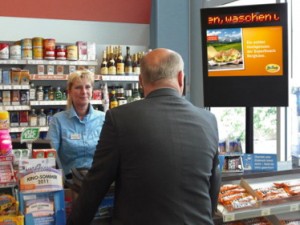 BP Tankstelle, Hamburg (one of the first to be rolled out.)

The contract will see digital signage screens installed in forecourts across the continent initially in Germany, Poland, Luxembourg, Switzerland and Austria.

In just two years Amscreen has established the UK’s largest digital screen media network, broadcasting on more than 3,000 screens nationwide to an audience of 25 million a week.

The decision to expand its forecourt network to Europe is a sensible one and surely works better for Amscreen than trying to sell their solutions into new verticals. The forecourt network works, simple to setup, easy to operate and these guys have learnt quickly how to scale a network (lessons for all startups here you know).

This move will see its audience increase to 40 million a week once this initial rollout with BP is complete (now we know why Steve Whitehead has been spending so much time on planes to Hamburg).

It’s an exclusive five year deal which will also see BP UK extending its partnership with Amscreen for a further five years.

The expansion will offer brands a pan-European media network and as media buyers have so often said that few actually want pan-European campaigns (it doesn’t fit their business model very much so why would they push that) it will be VERY interesting to see how this works out. We think it will go down very well with brands.

Jurgen Bloemers, Marketing and Cards Director Europe at BP, was quoted as saying “Following on from the success of our partnership with Amscreen in the UK, it made perfect sense to mirror this onto our forecourt network across Europe. Amscreen’s unique ‘plug and play’ technology is easy for us to install and is sure to modernise digital advertising across European forecourts by centralising messaging, reducing wastage and maximising store compliance.”

Simon Sugar, CEO of Amscreen briefed us yesterday under embargo “We are really excited about our expansion into Europe. After an encouraging two years in the UK we are keen to further develop the network and this deal with BP is a perfect starting ground to mark our entry onto the European market. The user friendly nature of our digital signage technology means that it can be easily rolled out across the continent and we hope to have our screens installed in over 1,800 BP and Aral sites in the coming months. This is just a start for us in Europe and we will be announcing other European forecourt partnerships in the coming months.”

If you will forgive the pun the DOOH industry in Europe (especially) Germany is really motoring at present.

This entry was posted on Wednesday, July 27th, 2011 at 08:11 @382 and is filed under DailyDOOH Update. You can follow any responses to this entry through the RSS 2.0 feed. You can leave a response, or trackback from your own site.