In terms of shows in London this week, that our industry could have chosen to adopt or exhibit at, there seems to have been one clear winner (even without an OOH zone [1]) 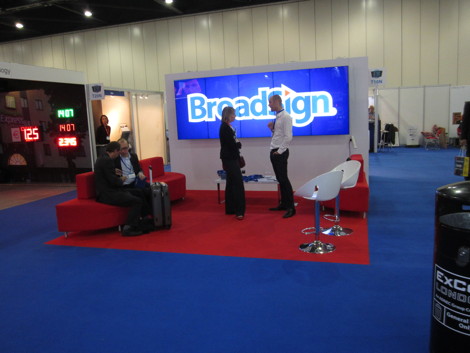 Shown above is #TheOtherOne .. BroadSign’s Daniel Parisien talks to a solitary visitor whilst an exhibitor on an adjacent stand looks on longingly, hoping for a turn.

Fair play to the guys who signed up and kept their fingers crossed but IMHO the way the show went out to Market and the simple fact that the area allocated to ‘DOOH’ really wasn’t made up of any more than 15-20% of that floor area!

If I was an exhibitor at this show I’d be demanding my money back.

The venue while large and spacious is just that little bit ‘crap’ to get to, even on public transport, too much effort required means punters don’t bother!

Again, IMHO I think this is the last time that we may see this mix of print and DOOH as honestly I believe that it is just too much to expect the traditional signage punters to see very little in a Digital oriented area.

For me, Europeans can only really keep attending ISE each year as this is still much more aligned with the community’s thinking and hey at least Screen manufacturers still want to go there!

Equally, I’ve gained so much benefit from attending DSE in Las Vegas the last couple of years I’ll keep going there too!

Finally while I think the likes of Beaver Group and others made 100% the right decision to attend MW Live they are potentially talking to a much more ‘real’ customer compared to what ESE or even ScreenMediaExpo has delivered previously.

I went down to the European Sign Expo yesterday to see what we were missing, having previously exhibited at every Screen Media Expo. As Tom has said, ESE was awful and whilst glad we did not commit to the show, those that did must be readying their emails to the organisers demanding refunds.

The overall FESPA show occupies 7 of the 8 halls with ESE being positioned at the far end of Excel in N8. From speaking with some of exhibitors they felt like the unwanted child that FESPA was hiding away from the 20,000+ visitors expected.

I can see why they felt this; as the signage was poor for the ESE presence (the irony), the main show-guide did not list any of the ESE exhibitors and the small ESE show-guide was only available outside hall N8 when you eventually found it. When you finally entered the ESE hall you were greated by Fairfiled, BrightSign and a few other digital signage related companies and then a mixture of PC manufactures and companies selling print supplies and double-sided tape. All very odd and confusing to anyone remotely interested in digital signage.

As a general AV/Technology show ISE stands alone in Europe (if not the world) as the best show for vendors to exhibit at and prospective customers to attend. Other than ISE, the focus has to be to exhibit at industry focused events, such as Marketing Week Live, so a hat-tip goes to those that are exhibiting at Olympia this week and demonstrating what can be achieved from passive and interactive digital media solutions.

I think all those who have been around for a number if years could see screenmediaexpo reducing in size over the last couple of years. ISE is indeed the show of choice for the AV industry and for resellers/partners it will continue to be a must attend. The great thing about MWL is the focus on retail marketing and therefore a great mix of agencies and end users with real needs. The trend will surely be digital signage companies looking for shows in relevant verticals such as retail and focus on engaging with end users.

It’ll end up being shows like ISE/DSE for the hardware/software and MWLive and suchlike for the creative types looking for partners that can help them realise their dreams/nightmares.

I only say nightmares because not all creative types get it right EVERY time! 😀

The exhibition proved positive, delivering a high quality event for the signage and DOOH industry.

In order for us to improve, we value you sharing your thoughts – your feedback will help us to deliver even more exciting and focused exhibitions for the industry in the future.

To take part in our visitor feedback survey, please click here (REDACTED). It will take no longer than five minutes to complete and will be open until 12th July.

Many thanks in advance and we look forward to seeing you at one of our future events.