Last week in Karlstad, Sweden, during the RAMP’13 event – whose aim is to inspire, amaze and create curiosity – six entrepreneurs came on stage to present their ideas in front of a jury of twelve investors. 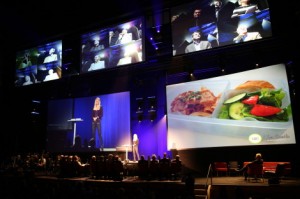 [1]The investors made different bids for each new innovation, similar to the concept of Dragon’s Den.

The core technology on four rear projected screens was run by DISE [2]. In total, four DISE Replays were used, one for each screen.

To three of the players, four web-cams were connected, to provide a live feed of the investors. In total, 12 cameras were displayed across three screens, and whenever the investors placed a bid, the bid was shown on top of the live feed to create a real live event feeling.

The fourth player was showing the summary of all the bids, ranging them from high to low or a ‘no bid’ decision. 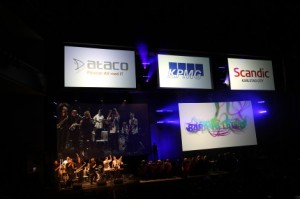 [3]The DISE Parser tool was used to trigger bids and a scoreboard presented and summarized all the bids.

Two additional overlay channels were also used: one displaying a slideshow of sponsor logotypes, and one for turning all the screens black.

RAMP, held this year on Oct. 9, is an established event and an important venue for Värmland (a province in western Sweden) industry.

It offers attendants new insights as well as an opportunity to broaden their networks of contacts through various meetings.