What happens when you add the elements of audio and touch to digital signage, particularly to video walls? 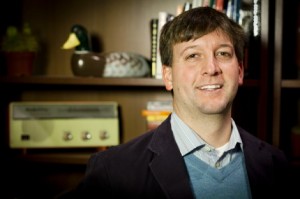 [1]Kirk VanderLeest, vice-president national accounts at Flixio Studios [2] knows, and he’ll be discussing these in depth, illustrating them with examples and case studies, at the #dse2014 Video Walls Unplugged event, which takes place on Tuesday 11th February 2014.

“It all comes down to the immersive, the experiential,” VanderLeest says during a short interview. “You know, we are sensual creatures but carnal beasts. We can do audio and touch, but the industry hasn’t quite got small and taste down yet. But the deeper we get into audio and touch, the more impression a brand makes.” (And he has some interesting statistics to prove it.) 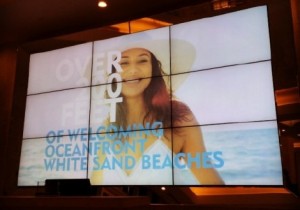 [3]Based in Portland, Oregon, Flixio is doing a lot with sound design, which extends far beyond simple blaring audio or a basic audio loop.

For example, a video wall at the Grand Hotel in South Beach (Miami) shows a beach where you hear the sound of the waves and this intensifies as the waves come closer and then recedes as they move off. In another case, the sound of a crowd changes as you ostensibly move closer or farther (away).

“Sound design can add 30% to the value of the content,” says VanderLeest. “And with conal and directional sound, you can target a specific individual. These are great for places like museums and hotel lobbies.”

Touch is particularly compelling, he says. “When people can zoom and pinch and swipe and expand, they’ll remember the brand.”

Video walls with touch are now being seen in the hospitality sector and museums and are beginning to be seen in flagship stores.

“They won’t be installed in everyday stores, but we’ll see more of them in higher priced specialty stores,” says VanderLeest.

“Along with audio and touch, I’ll also get in a little discussion about what you can do with 4K and 5K in video walls. That can open a whole new role.”

This sounds like VanderLeest will pack a lot of facts into his allotted time period. If you are considering installing a video wall that will attract, be remembered and compel to action, you don’t want to miss ‘Getting to Average: Engaging Two – or Even Three – of Our Five Senses With Video Walls‘.

Kirk is just one of the ‘Content Dream Team†‘ we have assembled for what will be the must-attend event of 2014. More details can be found here [4].