Alan James, OAA [1] chief executive told us “The media landscape and the role of different mediums in delivering successful campaigns has changed dramatically over the last decade particularly in reference to the rise of digital media”

He added “Britainthinks.com demonstrates that outdoor media continues to play a vital part in this mix, specifically highlighting that offline activity is essential in driving people online. Through the immediate response generated by outdoor, in addition to its ability to build strong brand awareness, strong online communities can be created, positioning the medium as a robust channel for the future.” 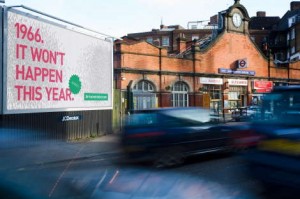 He is of course talking about the launch of the Outdoor Advertising Association (OAA) GBP 1.25 million national out-of-home (OOH) campaign that we briefly touched upon yesterday – see our post ‘Educashun Isn’t Working [3]‘.

The campaign actually called ‘Britainthinks.com’ and devised by the creative agency, (Beta) – founded in May this year by Garry Lace and Robert Campbell – the campaign demonstrates the medium’s ability to generate immediate response and aims to engage with consumers to build strong online communities.

At the heart of the creative are three separate and topical statements and a new website, Britainthinks.com [4], where consumers are encouraged to give their own opinions. 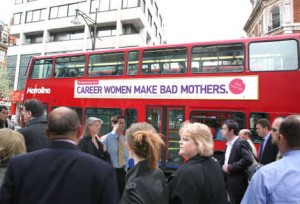 Under the umbrella theme of ‘1 Nation. 60 Million Opinions’, the advertising copy embraces three hot topics: ‘Career Women Make Bad Mothers’; ‘Educashun Isn’t Working’ and ‘1966. It Won’t Happen This Year’ and aims to encourage people to access Britainthinks.com to vote on these comments, see recorded views and debates and upload their own opinions or respond by posting videos or copy.

Alan James, OAA chief executive said “With Britainthinks.com we are aiming to demonstrate that, in addition to building strong brand awareness, outdoor media plays a vital part in delivering immediate response and driving people online. This campaign is moving outdoor away from being a traditional passive medium through engagement with the audience and placing it firmly as part of the future of advertising.”

The campaign is worth around GBP 1.25 million – the equivalent weight we understand of the launch of a new blockbuster film or of a campaign by a major telecoms company.

The campaign features over a range of outdoor formats including 6 sheets, 48 sheets, bus supersides, road, rail, retail, taxis and washroom media and started on 4 January 2010 for an initial two weeks.

“It is too simplistic a view for significant campaigns to rely solely on digital media,” adds James. “In fact, research by Google itself recently showed that offline activity is essential in driving people online, a point which reaffirms the OAA campaign’s overall purpose.”

Research by Google showed that 67 per cent of offline marketing activity drives people online. Garry Lace, founding partner of (Beta), told us “We’re incredibly excited about this project. Vocalising opinion has always been a great British pastime. In the pub, on the radio, in universities. We want to give people another forum for voicing their innermost grievances and create a brand which truly democratises debate.”

Each of the three statements included on the posters during this initial campaign were chosen as they reflect topical social issues leading into 2010. Education, a major socio-economic issue in the UK, continues to provoke debate which led to the statement,

Similarly, in an age where two thirds of mothers are in employment, ‘Career Women Make Bad Mothers’ captures another issue, which provokes strong opinions.

Finally, in a nation of football lovers and with the World Cup taking place in June 2010, ‘1966. It Won’t Happen This Year’ stokes the debate about whether the English team, now qualified, is up to the challenge of bringing home the World Cup in 2010.

We like this campaign, it’s almost a tradition in the UK that own / industry campaigns are somehow slightly irreverent – remember Posterscope’s ‘Try not to think about cheese [6]‘ and Oohgle [7] campaigns – the latter of which really created a buzz and got ordinary people asking what it was all about.

This is certainly a controversial way to go about using outdoor advertising!