Posterscope Ask ‘Do You Oohgle?’

According to Posterscope “When you see an Out-of-Home ad and then follow it up online, you’re Oohgling” !!! We like that, VERY clever!!! 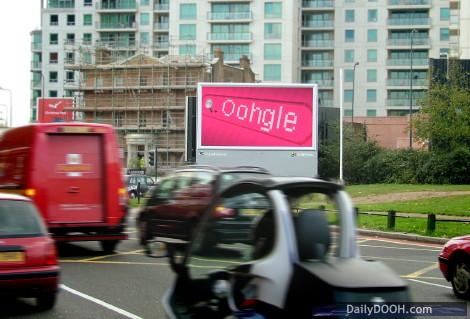 The Oohgle ads that you might have seen recently are about promoting Posterscope’s Prism Search tool that helps advertisers understand how well their OOH campaign achieves any online follow up.

The campaign is nationwide but the digital element is predominantly London based – we’ve now seen it ourselves in the London Underground on CBS Outdoor’s XTP and their poster panels and on Clear Channel’s Digital Roadside (shown above).

We don’t think that this was related but it shows a trend for copywriters – especially from those who are confident of their products and brands talking of which, google ‘dooh’ and see what comes up, Ed 😉

Posterscope tell us that it is a coincidence that it’s just over 12 months ago the last time they did their own outdoor campaign, ‘Didn’t you read me yesterday?‘ and ‘Try Not To Think About Cheese‘ in December 2007.

The campaign runs until 14th December.

This entry was posted on Friday, November 21st, 2008 at 08:46 @407 and is filed under DailyDOOH Update. You can follow any responses to this entry through the RSS 2.0 feed. You can leave a response, or trackback from your own site.