Not much gossip thus far at #ScreenMediaExpo after day one, mind you; Bob Clarke [1] was spotted walking the show floor, the rumour that he was thrown out by a security guard who thought he was a vagabond was however unfounded. 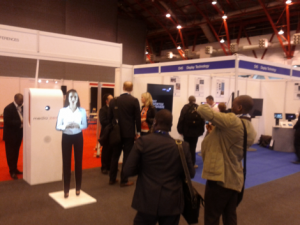 Please state the nature of your medical emergency

dZine were telling anyone who would listen that they had won business with CBS Outdoor and the poor Belgians were getting a little bit too excited. The facts seem to be that it’s a trial and the real point is that CBS Outdoor are desperate to find a replacement, any replacement to TELentice.

Everyone was talking about MinQii [3] but few it seems believed it was a merger of equals. Fewer still actually seemed to understand what it was all about.

There was a weird Darth Vader impression to kick start one of the conference sessions which went down like the proverbial lead balloon.

Barnaby Page (kindly) confirmed that the precogs were correct [4] – Christine Outram did indeed use the phrase ‘Minority Report’ in her presentation ‘Mash-up metropolis: key trends for the media savvy city‘ – not once but several times!! Not withstanding, Christine’s presentation was by all accounts superb.

We heard that David da Costa (ex RAM Vision of course [5]) is now CEO of Wonderworks Media Ltd. [6]. The announcement was due later this week we believe (and now they don’t need to bother).

Not on general display but one of the coolest things we saw was Ayuda demonstrating how they had easily managed to port their Splash (and by reference OpenSplash) player to both Google Android devices and Apple iOS devices (iPhone, iPad etc). If you are that way inclined then go see ’em and ask them to show you. Better still head online to the Google MarketPlace or iTunes store to download the app first, then go see ’em and get your device registered on their CMS so they can demonstrate more fully. Absolutely amazing.

Thanks for the update.

I do have to say that I wish DailyDOOH would not take unnecessary shots at Bob Clarke. Bob Clarke’s Instrumental Media Group of London was one of the important early pioneers in this industry. He gave the keynote at the first Digital Signage Expo in San Francisco, and with Tesco TV helped give this industry visibility in the early stages of this industry when it was sorely needed.