Jose Avalos [1]‘ keynote at #dse2014 was so riveting, so full of insight and prediction AND so well executed (it was like Steve Jobs had been resurrected, put on 80lbs and come to the show) how could anyone fall asleep during it… 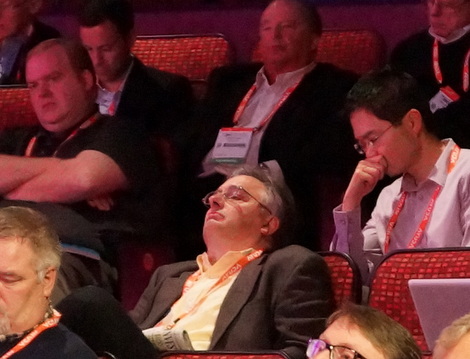 Here we were last Wednesday in Lost Wages, at the biggest and best Digital Signage show in the world listening to a chipmaker who missed the biggest explosion of computing power ever, tell us about the future [3].

If anyone had any doubts before Jose opened his mouth, tripped over his own tongue and failed to read his own teleprompter, that Intel had anything sensible to say about Digital Signage their fears were soon allayed.

We were given the same old Adidas video wall, a Pepsi Vending Machine, a glorified Costa Coffee teasmaid and some retail statistics that could have been garnered from anywhere.

Hardly the stuff of ‘futurecasting’ and predictably [4] with no ‘insight’ or ‘predictions’ – oh wait! Jose’s attempt at ending in Stevenote [5] style was his prediction that by 2020 there will be 50 Million screens in use. Wow!

Two things on that gobsmacker:-

The touching pat on the arm before Jose took to the stage by The Doctor who sat closely beside him as the opening video rolled, and was rarely seen NOT by his side the whole conference, plus The Pratt hanging around the Intel party during #dse2014 probably shows where Intel goes for most of its ‘futurecasting’ consultancy, so perhaps we shouldn’t be so surprised why Intel’s digital signage strategy is practically non-existent so poor.

There was of course no mention of the USD 17M wasted on the Cognovision acquisition [6] but some poor sod from Google was brought on stage to talk 1:1 with Jose about Chrome (last we heard that was based on Android and wouldn’t run Intel’s RCM which runs solely on WinDoze [7] – yeah, go figure that one as well).

We have a lot of respect for the organisers of DSE but they really blew it this keynote. As we said before; despite Intel taking huge amounts of exhibition space they are not a good bellwether of the digital signage industry (like 3M, like Cisco, like Harris, their interest will soon wane) and Jose is quite simply a very poor speaker.

Those who got up early to get to the Sands Convention Centre and managed to stay awake during the keynote would have walked away empty-handed. Quite simply this is not good for the industry and not good for the DSE show (and brand itself), next year Mr Gibbs and Mr Varrone why don’t you invite me to keynote – I PREDICT THAT I WILL NOT SEND ANYONE TO SLEEP!