Last year many of you emailed in and asked us what digital screen networks were worth taking a look at the day before Screen Media Expo – the resulting post seemed to be quite popular and so we thought we would repeat it this year with some old and some new recommendations.

Here are our **ten or so ‘must-sees’ in London. 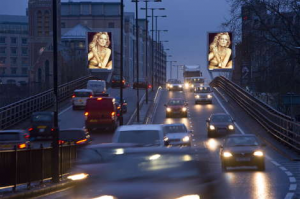 Lastly if you are on the hunt for wi-fi (when you not in your hotel) then do avoid Starbucks, Costa or Caffe Nero (where you will have to pay) – London is awash with much better local coffee shops that usually offer free wi-fi to entice in the traveler and student – there’s also a nice list of free wi-fi in the London area here [19].

McDonald’s also offer free wi-fi. Our favourite McDonalds is in the Strand (another Kaleidovision [20] install) right next door to Charing Cross station – it has comfy sofas and TVs downstairs.