With Ohio a key state in Barack Obama’s quest for the U.S. presidency last November, New York-based Adcentricity worked, in association with political consultancy GMMB, to develop a strategy and deployment of a digital out-of-home media program that would bring the state home for Obama.

Adcentricity’s successful program for Obama, which ran throughout August, 2008, paid off with this leading strategist for digital out-of-home media being awarded the Best Local Campaign award from MediaPost, in the first ever MediaPost Digital Out-of-Home Awards.

The competition drew 250 entries with awards presented in 16 categories. 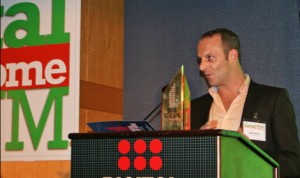 “The MediaPost Digital Out-of-Home Awards validate the fact that the medium can have an impactful role for creativity and ROI in the out-of-home advertising medium,” says Rob Gorrie, Adcentricity president. “Many of our peers submitted entries for this award, including creative shops that specialize in these campaigns, so we are honored to receive this recognition. Digital out-of-home advertising is growing at such a rapid pace, and advertising agencies have taken notice of the innovative way the medium can reach and influence consumers.”

Working with GMMB and the goldmine of voter polling data, Adcentricity was able to identify the targeted demographic and psychographic within vital geographic areas of importance to construct a strategic plan. The campaign produced a monthly audience of 866,189 serving 2,173,457 Barack Obama ad spots featuring an SMS call to action with specific key words in each designated market area.

Voters who engaged with a text message were sent a Barak Obama bumper sticker and were included in an on-going dialogue with ‘Barack and Michelle Obama’ driven by GMMB.

In 2008, Adcentricity, which also has offices in Chicago and Toronto, launched its AdVenue platform, a robust solution that helps marketers plan campaigns based on business objectives and goals and can target by region and venue type, along with specific demographic information.

The company is also a member of the Out-of-Home Video Advertising Bureau, The Advertising Research Foundation and Point of Purchase Advertising International.

This entry was posted on Monday, April 27th, 2009 at 00:46 @074 and is filed under Scuttlebut. You can follow any responses to this entry through the RSS 2.0 feed. You can leave a response, or trackback from your own site.