Viking Line, a Finnish operator of ferries and cruise ferries, has partnered with Scala to implement digital signs onboard its seven vessels. The digital signage features both informational and ad-based programming, and reaches passengers at various points on its ships. 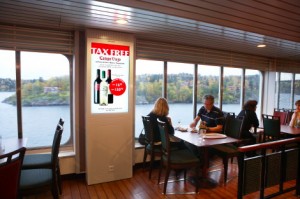 Viking Line tell us that they were printing about 2,000 sheets of paper every day for the cruise program so digital screens that could show this information would obviously reduce printing costs dramatically and be ‘greener’.

The first pilot was on the ferry Mariella which has 15 screens and six channels. By Summer 2009, all of its ferries will have digital signage networks installed.

René Engman, Viking Line’s Deputy Director of IT told us “Sales of promotional products have increased remarkably since the screens were installed. We clearly see that the customers perceive the message, and they more frequently purchase the promoted products,”

Viking Line’s next plan is installing screens at the terminals.

Viking Line commenced service in 1959, when the S/S Viking began sailing between the Finnish mainland, the Åland Islands and Sweden. Today Viking Line has seven vessels, which sail between the Finnish mainland, Åland and Sweden, as well as between Finland and the Baltic states. With Viking Line, a Baltic cruise from one city to another takes less than a day. Viking Line has a wide entertainment offering: casinos, restaurants, discos and live artists. Operations include passenger services, recreation and cargo carrier services.

This entry was posted on Thursday, April 2nd, 2009 at 10:57 @498 and is filed under DailyDOOH Update. You can follow any responses to this entry through the RSS 2.0 feed. You can leave a response, or trackback from your own site.

One Response to “Viking Line Takes Digital Signage On Board”