Unsurprisingly Sony had a big presence at NAB 2009 and we spent a good hour on their sprawling stand. Thin / Thick bezels apart there were a couple of interesting things in our world to look at. 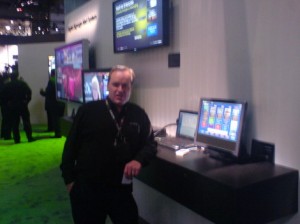 Jeff Hilliard, President and CEO. Compudigital Industries (shown here) was providing a software solution on top of a really nice looking PC based Sony signage player with integral 160GB HD. It was quite heavy but we were told that it could be mounted on the rear of a screen.

Compudigital is a SONY Authorized System Integrator and Application Developer and Jeff told us that he has been in business since 1985 – starting out as a Research and Development company serving the Genetics Industry.

We are sure that Sony has dozens of these initiatives all over the place but we liked the interrupt, web driven user interface to the system which Jeff’s folks had built.

This entry was posted on Tuesday, April 21st, 2009 at 13:45 @614 and is filed under Scuttlebut. You can follow any responses to this entry through the RSS 2.0 feed. You can leave a response, or trackback from your own site.