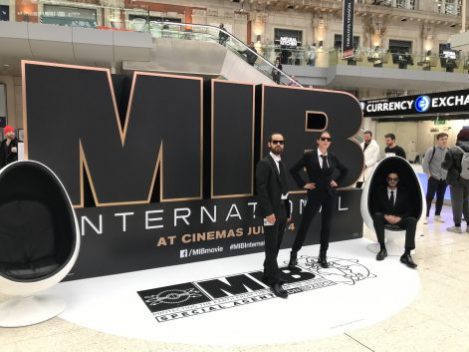 The five-meter experiential stand in front of Waterloo Motion, invites users to join the London Branch of MIB by creating their unique ‘Branch ID’ video, a bespoke GIF capturing the person putting on the infamous MIB black sunglasses. Once their ID is created it is displayed on JCDecaux’s Waterloo Motion.

All done to celebrate the launch of ‘Men in Black: International’, a continuation of the Men In Black story.

Catherine Knight, Talon’s Creative Solutions Project Director told us “This campaign is a great demonstration of bringing together the experiential and digital OOH opportunities within the canvas of London Waterloo giving station users their own moment of fame on the Motion screen. We are delighted to have been able to create this campaign with Sony Pictures to give Londoners a fun and interactive experience with the new MIB release.”

Talon’s Creative Solutions team created the concept for the experiential activation and managed its execution.

Agents at the station are instructing commuters, who want to help protect the earth from the scum of the universe, on how to create their own ID and join the branch.

The digital experiential campaign runs from Monday June 10 to Sunday June 16 and features bespoke content filmed by Chris Hemsworth and Tessa Thompson, who star as Agent H and Agent M in the film. Both will speak directly to everybody who interacts with this super contextual DOOH experiential activity.

Around 1,400 GIFs are expected to be created during the experiential campaign activity, as well as additional social activation, with each ‘new recruit’ being given a pair of MIB sunglasses to take home.

The experiential activity is a core element of activation for the film, with a wider media plan featuring LF DPPH and bus T-Sides will also be in place. ‘Men In Black: International’ will be released in cinemas on Friday 14th June.

This entry was posted on Monday, June 10th, 2019 at 06:57 @331 and is filed under DailyDOOH Update. You can follow any responses to this entry through the RSS 2.0 feed. You can leave a response, or trackback from your own site.