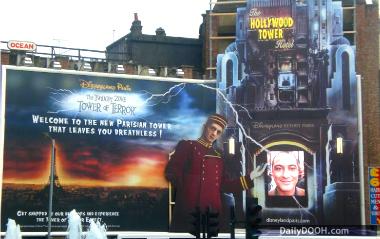 Adwalker are doing some interesting “Photo Marketing” work in conjunction with the Disneyland Paris “Tower of Terror” Campaign in London.

It’s a four week campaign where Adwalker use Bluetooth and 3G technology to send photographs of people on the street from the Adwalker screens to Ocean Outdoor’s giant billboard on the corner of Oxford Street and Tottenham Court Road, London.

This entry was posted on Thursday, April 24th, 2008 at 18:06 @796 and is filed under Scuttlebut. You can follow any responses to this entry through the RSS 2.0 feed. You can leave a response, or trackback from your own site.