The streets of Liverpool recently came alive for a unique five-day arts festival, dubbed Abandon Normal Devices (AND) as the event celebrated more than 15 new commissions, over 25 film screenings, six UK premieres and over ten exhibitions from more than 50 leading and emerging international artists and film-makers across more than 14 of Liverpool’s major arts venues and public spaces. 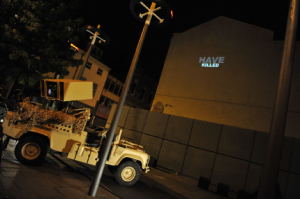 Liverpool-based FACT (Foundation for Art and Creative Technology) called upon the skills and vast inventory of Christie SD and HD instruments to service most of outdoor projections that took place on prominent buildings in the city.

The one that really caught our eye was Krzysztof Wodiczko’s War Veteran Vehicle – an ex British military vehicle, which has been converted into a roving projection unit, and was driven by veterans through the streets!

The vehicle’s gun placements were re-fitted with a Christie Roadster S+20K SXGA+ DLP 3-chip 20,000 ANSI lumens projector and a PA system, to transmit the testimonies of returning veterans from Iraq and Afghanistan (and their families) onto the facades of buildings and other monuments in the city via large scale slide projections.

The complete artwork was presented (between 8.30pm-11pm) across the five nights, with the truck driving to different locations, including Ropewalks Square, Georges Dock Building, World Museum and the Metropolitan Cathedral’s bell tower.

Christie, a wholly-owned subsidiary of Ushio, Inc., Japan, (JP:6925), is a leader in visual solutions for world-class organisations, offering diverse applications for business, entertainment, and industry. A leading innovator in film projection since 1929 and a pioneer in digital projection systems since 1979, Christie has established a global reputation as a total service provider and the world’s single source manufacturer of a variety of display technologies and solutions. With the acquisition of Vista Controls Systems, Corp., Christie offers the most complete and advanced solutions for cinema, live venues, control rooms, business presentations, training facilities, 3D and Virtual Reality, simulation and education as well as industrial and government environments.

This entry was posted on Friday, October 9th, 2009 at 07:36 @358 and is filed under Scuttlebut. You can follow any responses to this entry through the RSS 2.0 feed. You can leave a response, or trackback from your own site.