Fashion And Opinions At The Pump

Irvine, California-based PumpTop TV, national U.S. digital media network located at-the-pump, has announced a new content source from the world of fashion, and has launched a grass-roots ‘polling system’ allowing people to ‘have their say at the pump’.

StyleCaster helps users get to know their personal style better with every click – from clothes to styled looks to articles – that is tailored just for them. Carol Han, StyleCaster’s executive fashion director, will be presenting the latest in fashion and style trends in the 30-second spots.

As viewers enjoy the StyleCaster videos, they will see adjacent banners filled with such information as where to buy and how to wear certain fashion pieces. 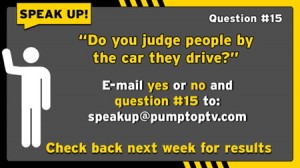 now also offering drive-through voting. As part of its effort to allow Americans to weigh in on topics from the latest fashion trends, to political picks, to pop culture opinions, PumpTop TV has created “Speak Up,” an interactive, grass roots polling system. Millions of people will be given the opportunity to vote on an issue each week at PumpTop TV simply by emailing a Yes or No to the question of the week at speakup@pumptoptv.com. Results will be posted on PumpTop TV and the PumpTop TV Web site each week.

PumpTop TV Beta tested the polling over several weeks before its recent launch.

“The reaction has been overwhelming,” says Doug Woo, executive vice-president of AdtekMedia, the parent company of PumpTop TV. “People love to read our polling questions while they pump gas and then file their votes immediately on their wireless devices or when they access their home computers. In either case, they love to vote and then find out the results a week later.

“We really feel that this kind of easy access to ‘Speak Up’ is going to add a whole new dimension to polling. We have also been approached by several sponsors to host a certain category of questions over a certain time period. All that will be worked out over the next few months.

“Future questions will focus on many different areas and categories. PumpTop TV encourages viewers to write in to speakup@pumptoptv.com and let us know what questions they want asked. ‘Speak Up’ is as much a viewer’s choice poll as a corporate-sponsored event.”

‘Do You Judge People By The Car They Drive?’ was created after many PumpTop TV viewers asked for an auto-centric question.

This entry was posted on Wednesday, November 18th, 2009 at 07:30 @354 and is filed under Scuttlebut. You can follow any responses to this entry through the RSS 2.0 feed. You can leave a response, or trackback from your own site.