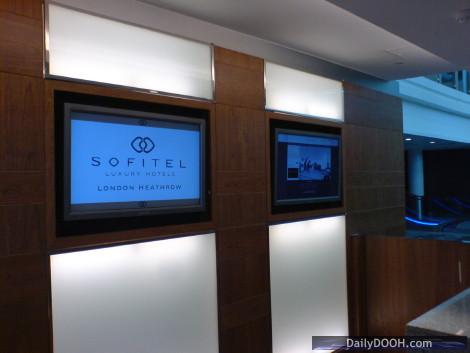 Adjoining Terminal 5 of Heathrow Airport, Sofitel London Heathrow offers 605 bedrooms and suites plus 45 meeting rooms, the largest of which can cater for a dinner or ball function for 1000 guests. The hotel features the best in fine dining, theatre style cooking, a lobby bar, tea salon and a cocktail bar, as well as a state of the art Health Spa and Gym and extensive undercover car parking. Superb transport links including the Heathrow Express rail service, taking you to Central London in 21 minutes.

Not surprisingly for a 5 Star hotel located next to T5 there are screens everywhere though more surprising was that Quadriga in this instance did NOT win the contract to supply the in-room TV facilities.

We believe that Pro AV did the install with Saturn Communications.

Sir Cliff Richard who officially opened the hotel earlier even got up and sang three songs for us!

This entry was posted on Friday, July 11th, 2008 at 09:30 @438 and is filed under Scuttlebut. You can follow any responses to this entry through the RSS 2.0 feed. You can leave a response, or trackback from your own site.