The 2010 FIFA Soccer World Cup has been over for awhile, but we’ve received this great photo that we felt was well worth sharing, along with the story behind it. 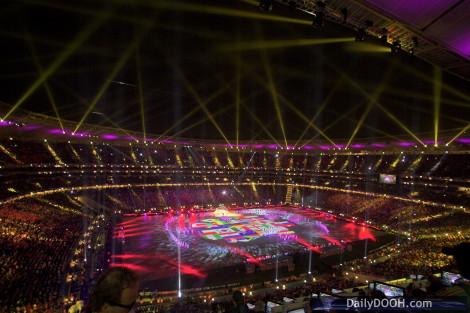 Gearhouse South Africa was contracted by ceremonies producers VWV Group to deliver all technical aspects of the closing ceremony of the World Cup — including rigging, power, sound, lighting and large format projection, using the dynamics, skills and services of most companies in the Gearhouse Group.

The projection, however, was contracted out to France-based E/T/C, who supplied all the hardware and control solutions, and was constructed around 18 Christie HD18K Roadster projectors, which helped to produce a visually stunning 30-minute show at Soccer City Stadium in Soweto. These were considered the best machines for the job, with the combination of 16:9 format and 18K power essential to producing the desired results in brightness and resolution.

The event took place ahead of the final, which saw Spain win their first World Cup, beating Holland 1-0. It reflected the vibrancy, energy and colour that characterized one of the most successful World Cup tournaments ever. The show featured a cast of 740 including 40 ‘elephant operators’ plus 35 headline artists.

Ross Ashton, UK-based large format projection specialist, was appointed to help co-ordinate the stunning pitch projections, and he worked closely with E/T/C Paris who are the best known global exponents of the genre.

This is the first time that monumental projection has been used in South Africa, with the E/T/C Paris team led by Patrice Bouqueniaux.

The dramatic 55-metre square projections in the middle of the field-of-play were delivered by Christie’s projectors, mounted on two platforms along the long sides of Soccer City. The projectors were in six stacks of three, covering the pitch, which was divided into six areas.

The show’s video content was produced by VWV, who engaged Johannesburg-based Ministry of Illusion for the graphic scenes. Each projector received its own video feed and keystone correction to eliminate discrepancies between their optical centres.

E/T/C’s powerful proprietary OnlyView PC-based system was used for control, programmed and operated by Yan Kaimakis. Data was distributed via a doubled up network fibre system — vital for such an important one-off event — devised by Gearhouse’s Chris Grandin and Dave Black. Footage for the stadium LED screens was also output via the OnlyView system, with a pitch projection feed sent to the host broadcaster.

The spectacular lightshow was designed by Gearhouse’s Hugh Turner and Tim Dunn, with Dunn also programming and operating the show.

The vision was an exercise in logistics. Illumination had to be a careful balance so it fulfilled the creative criteria of looking dynamic on camera as well as for the 94,000 capacity audience at Soccer City – while not interfering with the Christie pitch projections.

The show itself — conceptualized and produced entirely by the VWV Group — was a fast-paced, lively and accessible mix of contemporary African music, dance and theatre, including a family of 13 elephants (life-sized puppets) and a performance by Shakira of her Waka Waka 2010 World Cup theme song.

This entry was posted on Thursday, August 5th, 2010 at 08:02 @376 and is filed under DailyDOOH Update. You can follow any responses to this entry through the RSS 2.0 feed. You can leave a response, or trackback from your own site.