Amscreen, who we sometime forget was only established only two years ago, scooped its third award of the month last night, when it picked up the Retail Systems award for ‘Best use of in-store marketing technology in retail‘ at the Retail Systems Awards in London for the firm’s digital screen network in BP stores. 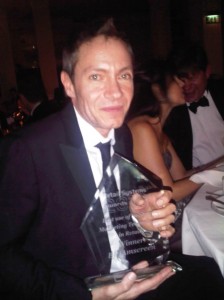 The accolade comes hot on the heels of two other recent successes for them, having also won the ‘Digital Signage manufacturer’ at AV awards and ‘Best Digital Network’ at the POPAI awards in recent weeks.

Simon Sugar, Amscreen CEO, told us “We are delighted to have been recognised by our peers at the AV, POPAI and Retail Systems Awards. When we entered the industry two years ago, there was a degree of scepticism about what Amscreen would bring to the market, but I think we’ve proven to the doubters that we’re here to stay and that we are committed to removing barriers to create digital signage solutions for the masses”.

Amscreen, whose networks broadcast to over 3,000 sites around the country, has already had a busy year, having secured deals with the likes of ESSO, Booker, Shell, Spar Scotland and WH Smith Travel, and with advertisers such as Sky, Cadbury’s and Tom-Tom.

This entry was posted on Friday, October 29th, 2010 at 11:30 @521 and is filed under DailyDOOH Update. You can follow any responses to this entry through the RSS 2.0 feed. You can leave a response, or trackback from your own site.

One Response to “Amscreen Celebrates Hat Trick Of Awards”