Shoplifters Of The World Unite

Shoplifters would be wise to stay away from New York’s Staten Island Mall: Mug shots of local convicted petty larceny felons are being displayed there on the Adspace Digital Mall Network. 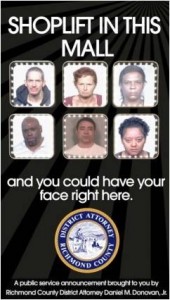 This is the third year in a row that the District Attorney’s office has used the Adspace Digital Mall Network for its PSA.

The 15-second spots are airing throughout the holiday season, every six minutes, on 11 digital advertising boards located in the Mall. The ads are funded by revenue seized from criminals as part of Staten Island DA Daniel Donovan’s Asset Forfeiture Program.

The Adspace network of Smart Screens has proven beneficial to retailers who use the screens for targeted, point-of-purchase advertisements. This anti-shoplifting campaign gives an added benefit to those retailers who will do whatever they can to not to lose money this season.

In other mall news: In Canada, PayPal has launched Mall Traffic Reports on Twitter through @PayPalCA.

The service will give shoppers a way to check how busy malls and mall parking lots are before they venture out to buy gifts. The reports are an easy way for shoppers to share information about wait times, store lineups and congested parking lots by posting tweets or real time pictures, alerting others to the busiest shopping destinations using the hashtag #ESCTheMall.

The campaign is a response to the findings of a recent Ipsos Reid survey conducted on behalf of PayPal Canada, which revealed that half of all Canadians find the crowds and long lines of holiday shopping frustrating. The survey also found that holiday shopping takes a lot of time – an average of five trips to the mall and 11 hours for Canadians.

“PayPal’s goal this holiday season is to help those who are frustrated by the typical, overcrowded shopping experience to escape the mall,” says Nicky Mezo, head of marketing at PayPal Canada.

Of course, with so many merchants now accepting PayPal through their websites, we recognize that the company has the ulterior motive of wanting more customers to do more of their holiday shopping online.

This entry was posted on Monday, December 13th, 2010 at 10:50 @493 and is filed under DailyDOOH Update. You can follow any responses to this entry through the RSS 2.0 feed. You can leave a response, or trackback from your own site.