William (Bill) Budwitz is a software engineer who knows what he wants, so when he joined Rave Motions Pictures with the mandate to update the signage in its 66 theatres across the U.S., he took a full six months of lab evaluations to find what company he’d want to work with. 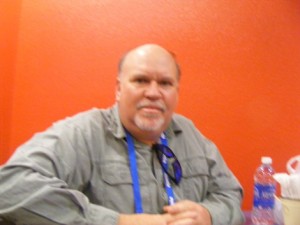 “Sometimes it took us two or three weeks to get back to people and say ‘No’, but it took only a few minutes to choose Real Digital Media,” he says.

Budwitz has now become a one-man cheering section for RDM, which is now in the process of rolling out a complex of digital signage across the 66 theatres after a pilot run in Hurst, Texas.

One of the biggest installations just was completed at the rave theatre in Las Vegas and it was included as part of a Live Installation Tour held this week as part of Digital Signage Expo.

It’s far beyond what RDM originally envisoned. Budwitz’s background made him dig deeper.

“I know what I want, and no matter what I’ve asked, RDM has never said it couldn’t be done.,” says Budwitz. That included learning and incorporating Silverlight for the current installations, and he already has RDM delving into Near Field Communications, to be incorporated in the future. “And they are always there to help and support.” 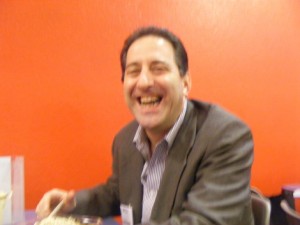 The Las Vegas theatre sees one million people pass through it annually, and it has been voted the top theatre in Las Vegas for four consecutive years. Its new digital screen installation is typical. In the box office area, there are two 46” vertical screens showing movie trailers and five 46” landscape screens showing such information as ticket prices, show times and promotions.

“It helps the lines move faster if they can already see that a specific how is sold out,” says Budwitz.

In the lobby, there are five wayfinding screens directing people, if a movie is showing at that time, whether the theatre is in cleaning mode, or whether people are being seated.

“They pulsate when people are being seated,” says Ken Goldberg, CEO, Real Digital Media. “There are also menu boards at the concession stands to complete the full installation. Because there are an average of three new movies a week, the stands often offer promotions around them. But the prices change frequently, and if a promotional item is sold out, the item must be removed from the boards quickly. They have smart content built in.”

We asked Budwitz how he foresees the eventual use of NFC in the future. One way would be to presell DVDs when available of the movies being seen. Another would be to sell gift cards that give you a discount.

“I lived in China for a year and saw how well NFC worked there, so we’ll add it in when the traffic demands,” Budwitz says.

“In terms of other future plans, it’s important to know what the future status will be. We already have ticket kiosks, so will put screens in those. And when there are special holidays, we will supplement screens for these.”

“We do what our customers want,” says Goldberg. “We had a focus group-type meeting last May where our clients told us what they want and we told them what we were thinking about and whether our ideas made sense or where we should focus. It ended up that, not only was it good for us but it also ended up a sharing session where our clients also helped each other on how they dealt with certain situations. We hope to make it an annual event.”

And we expect that it’s the type of event and thinking that helps draw the praise from clients like Budwitz.

This entry was posted on Thursday, March 8th, 2012 at 10:31 @480 and is filed under DailyDOOH Update. You can follow any responses to this entry through the RSS 2.0 feed. You can leave a response, or trackback from your own site.