Cross River Network of Weehawken, New Jersey and Port Imperial Ferry Corp. (NY Waterway), believed to be the largest private ferry company in the U.S., have made a 10-year agreement under which CRN will serve as the exclusive provider of a state-of-the-art digital advertising system at certain trans-Hudson terminals.

The new system, which launched on March 5/12, uses 47″ Panasonic digital screens to deliver a customized blend of information, entertainment, and both national and local advertising to passengers. The company is using Scala 5 software to manage the content. Expansion of the service is expected to extend to ferries and busses later this year.

Referring to Cross River Network as the “leader in delivery of digital information on-the-go”, Arthur Imperatore, Jr., executive vice-president of NY Waterway, says “CRN’s modern approach to delivering dynamic information will add to the overall enjoyable travel experience our customers have come to rely on and enjoy.”

Peter Romanoff, CRN president, says, “We could not ask for a more supportive and encouraging partner than New York Waterway and are excited to be a part of bringing the ferry rider’s experience to a new level.” 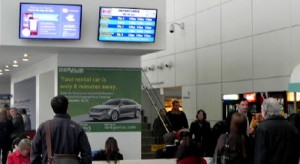 We learned of the launch of the CRN network from the firm’s management team at the Digital Signage Expo in Las Vegas, who told us that the network was initially launching at the Weehawken, Midtown, Hoboken North, Edgewater and Belford terminals. The screens provide passengers with full-motion digital ads, as well as up to the minute scheduling information, local sports and weather, and late-breaking news while they commute between New Jersey and Manhattan.

NY Waterway, owned and operated by Port Imperial Ferry Corp. and Billybey Ferry Co., provides the largest privately-owned commuter ferry service in the United States, carrying 35,000 passenger trips per day (8 million trips per year) on 31 boats serving 21 routes between New Jersey and Manhattan, on the East River between Manhattan, Brooklyn and Queens, between Rockland and Westchester counties, and between Orange and Dutchess counties. The robust nature of the service and the ever increasing popularity of make this an attractive option for commuters, leisure travelers and tourists alike.

Cross River Network is a privately owned advertising company delivering more than 580,000 advertising impressions per month in the fast-growing digital out of home market

This entry was posted on Friday, March 23rd, 2012 at 00:23 @058 and is filed under DailyDOOH Update. You can follow any responses to this entry through the RSS 2.0 feed. You can leave a response, or trackback from your own site.