It was interesting to talk to the various exhibitors in the Digital Zone at #2013SignExpo, to see why they decided to exhibit, what they were showing, what kind of a reaction they were getting, and what they expected.

Here are some of the words of exhibitors about which we haven’t already written in the last few days: 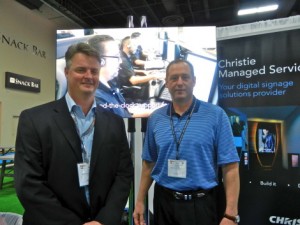 Christie Managed Systems of Austin, Texas’s David Guthrie, director of business development, seemed quite pleased with a small number of cards that he collected.

“I think the cards that I collected were quality, not necessarily quantity,” said Guthrie. “Of course, we’ll see what happens in the future. But we considered this more of a meeting place, where we could get to know the sign people and help them learn about the digital space; It was more of a testing of the waters, and a chance to tell potential clients about the high trust we have with customers whom we help to design, build, deploy and support.”

Clarke Systems, Allentown, Pennsylvania-based architectural signage supplier, has been doing work in digital signage for five years. Chuck Kuczynski, territory sales manager, was telling people that, rather than print and production of graphics, if they use digital signage, the cost levels out quickly and that they can have advertising and other content revenue that they were not getting before. 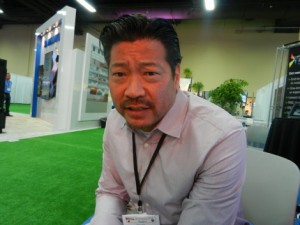 Ingram Micro, Santa Ana, California, wanted to get known and show that it could be a partner and help with hardware, software, content and any other services needed. The digital signage unit of Ingram Micro, believed to be the world’s largest IT distributor, has had double digit growth constantly since its launch in 2007.

“We can offer a full solution distribution,” said Keven Yue, senior manager, business development. “We can help create value for resellers to earn the bid and get bigger. And we enable the customer to roll out under his own brand. We’re the go-to partner and support our resellers.”

STRATACACHE, Dayton, Ohio, was particularly interested in showing its solutions for menu boards, “because there will be a million displays needed by food service companies because of the new requirements to show nutritional information in the U.S.,” Stephan Choi, senior vice-president, told us. While we didn’t get to talk again later, he generally seemed to be busy talking to booth visitors. 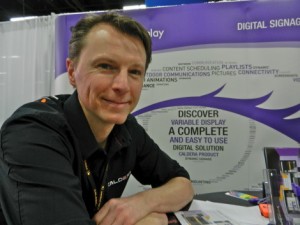 Caldera, with its Variable Displays product, is a software manufacturer based in Strasbourg, France, with a U.S. office in Burnsville, Minnesota. It has been highly involved in developing software for digital wide-format printing but got into digital signage two or three years ago.

“We are here to help educate customers on how they can move into digital signage,” said Sébastien Hanssens, vice-president marketing (located in Strasbourg). “It’s not the idea to kill print. It’s more to show that, for example, they can have LEDs and, with laminated vinyl, can transform a window into a monitor. It’s a matter of education.”

Shuttle, City of Industry, California, which has been building computers for 30 years, moved into commercial signage three or four years ago.

“We felt that the traditional sign market was beginning to get really interested in digital signage,” Marty Lash, director, sales and marketing, told us. “Customers were asking for it.” We noted that one of Shuttle’s products is a tablet-based education total solution. 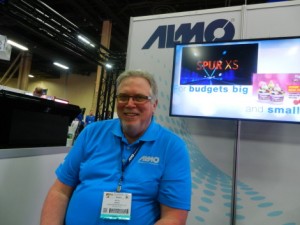 Almo, headquartered in Philadelphia, is a major distributor of professional A/V, consumer electronics, major appliances, specialty appliances and even wire and cable. The company figured that a lot of small- and medium-sized sign businesses were visiting the digital zone mainly for education, to get general knowledge, and to know how they can get into digital signage.

“Most people are looking for applications,” said Russell Short, business development manager, NEC, at Almo. “They know that there is a steep learning curve, that education is needed. We tell them that they can get the products they need if they want and we point them towards NEC. Our own role is that we distribute and sell to the pre-sellers.” 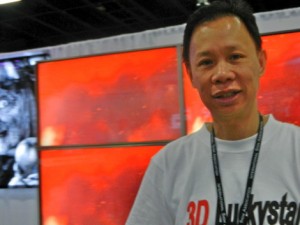 3D Lucky Star, from the city of Shenzhen, China, is a five-year-old company. “We’ve just arrived here and want our glasses-free 3D product to be known in the U.S.,” Isaac Cheung told us.

Daktronics, Brookings, South Dakota, used the event to show its new street level display for outside buildings. Jon Bauman, video products demonstration technician, said that it can be altered to needs and used for either static or digital signage.

Orbit Micro,
Richardson, Texas, was looking for potential customers. “We sell the hardware and we work with Nexis,” said Mark Stone, vice-president sales. “We’ll be doing our own proprietary products.” 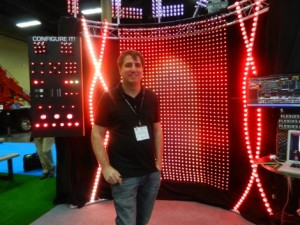 FLEXiFLEX, Lincolnwood, Illinois, was showing its lighting screen for large surfaces such as the sides of buildings and waters towers. “We can customize for any circular structures,” said Brett Gardner, founder and CEO.

Among others to whom we didn’t have a chance to talk included Black Box Network Services, Lawrence, Pensylvania, and AD Systems automated display systems, San Francisco. However, we have to offer them all kudos for showing up to help the sign industry learn about digital signage.

This entry was posted on Wednesday, April 10th, 2013 at 05:05 @254 and is filed under DailyDOOH Update. You can follow any responses to this entry through the RSS 2.0 feed. You can leave a response, or trackback from your own site.