And so DSE draws to a close for another year. It certainly wasn’t a disappointment – it was very well organised, all of the exhibitors we spoke to seemed to be happy and it has survived the ‘recession period’ well and should be well placed to come out fighting in 2010.

There are a couple of obvious things that need to change and we hope that the organisers, exhibitors, speakers, associations and other interested bodies take a good honest look at what was good and bad, what worked and what didn’t.

From a purely selfish (press) point of view, Geri Wolff, President/CEO, Market Works International, Inc. who looked after us was quite simply FANTASTIC. Great communication leading up to the event, lots of reminders on what was happening, lots of prodding and her team were great over the 3 days. If you were at DSE you may have seen four folks walking around with DailyDOOH Press badges (Bill, Manolo, Terry and myself) and we all benefited enormously from Geri’s obvious enthusiasm for the event.

In terms of event coverage we would have loved to have done more; even with four folks it was difficult to do all of the summits, conferences, break out sessions and the exhibition floor true justice. We received a lot of positive comments over the 2 /3 days on what we were doing and surely (let us blow our own trumpet for just a second) no one was anyway near us in terms of coverage?

Day 2 followed pretty much Day 1 in being busy in the morning, with a slight drop off of folks during the lunch hour as many folks would have left early. We reckon that over the 2 days about 2,500 folks attended rather than the 3,500 – 3,600 that several people have suggested BUT as we said yesterday the exact number does not matter, the event did not let itself down and can be pleased with itself that it is all set for 2010. 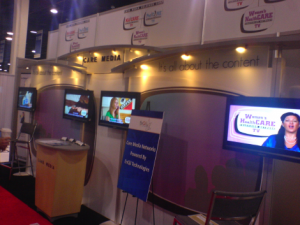 One thing for sure that the show needs is more folks who may want to buy something!! Brands, agencies and retailers are a must. The new OOH event that ran alongside DSE is a start – it was great to see The Care Network at the show and CBS Outernet and Channel M. The pavilion for these guys was however at the back of the show. Hey!!! you have got this all wrong – these folks (and not Ronin and not BroadSign) should be at the VERY FRONT of the show.

These media owners should be absolutely at the centre of what we do, same also applies we think to the likes of PRN – move ’em to the front of the show.

The content pavilion didn’t really work. These guys should be distributed around the show for sure.

We liked what BroasdSign did with their booth – comfy sofas, private meeting rooms and free wi-fi and the organisers either need to encourage an exhibitor to do that again next year or better still do an open area on the show floor for general consumption providing similar.

Networking is a key element of shows like these and comfy, relaxing break out areas are an absolute must.

Regular readers know our views on free and pervasive wi-fi and the show and the conferences needs it desperately (just get a sponsor to open it up for everyone). Our contributors and I had to mess around every day with sorting out cellular Internet access and / or Convention Centre wi-fi and it was a real struggle to be ‘always-on’

We wanted to be constantly online of course to keep up the constant Twitter, something that all of you who attended (AND especially those who could not attend) told us you enjoyed imensely. That ‘always-on’ needs to be for everyone though not just the press.

We will probably cover our thoughts on conferences in a separate post because we still have some things to say about the ISE DOOH Business conference in Amsterdam back in early February and on the half dozen or so summits coming up next at Screen Media Expo Europe in April in London.

Let’s just end by saying Great Fun! We really enjoyed ourselves, it was hard work, we made some new friends and caught up with old ones. We saw some great stuff and looked at an industry that if it works together, STAYS HONEST (most important) can come out the other end of this downturn stronger than ever.

This entry was posted on Friday, February 27th, 2009 at 01:20 @097 and is filed under Scuttlebut. You can follow any responses to this entry through the RSS 2.0 feed. You can leave a response, or trackback from your own site.

One Response to “DSE (Quick) Thoughts After Day 2”