Billed in any normal year as “the largest professional audiovisual trade show in North America” industry experts are now predicting that #InfoComm21 is likely to attract between 7,500 and 10,000 attendees next month. 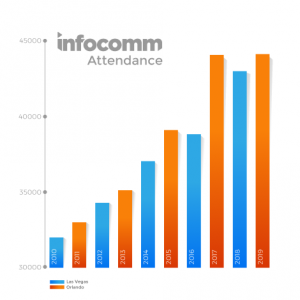 When you think that also includes people working booths the event is surely going to look like a ghost town, no matter how many food trucks and sit down areas they bring in to fill up the space.

Despite the fact that the organisers of both #EC21, which was due to take place a few weeks earlier, also in Orlando, FL. and #NABshow in Las Vegas were both canceled as in-person events, the nice folks at AVIXA are insistent that their show will go ahead.

The organisers are still touting 400 exhibitors, although we hear that many booths will go unmanned and few exhibitors, like LG are even bothering to build a (proper) stand, one has to ask why bother?

This entry was posted on Tuesday, September 21st, 2021 at 08:21 @390 and is filed under DailyDOOH Update. You can follow any responses to this entry through the RSS 2.0 feed. You can leave a response, or trackback from your own site.