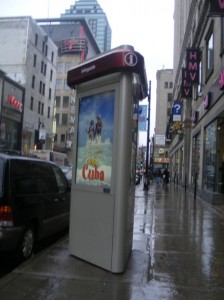 Astral Media Outdoor has installed its new three-sided Infoguide just east of Peel St. on Ste-Catherine in the heart of Montreal.

The Infoguide, introduced to agencies and press in February.

It features a digital touch screen on one side offering information on streets, tourist spots, retail and restaurant locations and other information for shoppers and tourists.

Several similar Infoguides will go up throughout Montreal in the near future.

This entry was posted on Monday, April 6th, 2009 at 15:19 @680 and is filed under Scuttlebut. You can follow any responses to this entry through the RSS 2.0 feed. You can leave a response, or trackback from your own site.