EuroShop – Was Too Good To Miss! 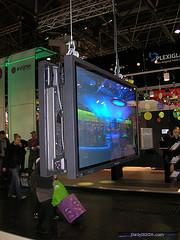 Judging by all the people we de-briefed who attended and exhibited the EuroShop event (EuroShop is the Global Retail Trade Fair held at Messe Düsseldorf, Germany which ends today) it was well worth the digital signage folks attending.

Whilst it is okay (AND important) for the industry to have its own “Digital Signage” expos and conferences, DS and DOOH as part of other events – Retail in this case is obviously also important in a vendor’s marketing mix.

We firmly believe that for those DS suppliers who attended EuroShop it will have been INCREDIBLY worthwhile for them and for those who didn’t and who work or want to play in the Retail sector it was an opportunity most definitely missed.

Ole Frank Nielsen from Acrossmedia / Mermaid kindly took some great photos of EuroShop and we have used one of them he supplied to us, as above.

He told us “The place it self was awesome – from a hardware point of view any way. 3 halls dedicated to digital signage. Businesses from anywhere in Europe – small and big. RFID technology, large screens, small screens – the only part it lacked was content”

He also told us that “almost every stand in the 17 halls had a flat screen” which is of course a great market in itself.

There was of course also a POPAI Village.

EuroShop saw no Cisco, no Remote Media, no Dynamax, no EnQii (all folks with an expressed interest in the Retail sector) which was a shame (they have all missed out we think). One Digital Signage vendor who consistently seems to get it correct with which shows to attend is Scala. If you work in this space you wouldn’t do too badly if you read Scala’s list of upcoming events and followed them wherever they exhibited!

Even before we start a review of the Events happening in 2009 and 2010 (something we will put together in October or November this year) we would be safe in saying that if you play in Retail signage you should put aside some budget and mark your Calendars for EuroShop the next time it is on (we think Euroshop happens every third year).

This entry was posted on Wednesday, February 27th, 2008 at 07:40 @361 and is filed under Scuttlebut. You can follow any responses to this entry through the RSS 2.0 feed. You can leave a response, or trackback from your own site.

One Response to “EuroShop – Was Too Good To Miss!”