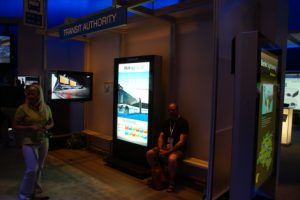 The Samsung stand at InfoComm 2009 was huge and impressive!!

Our favourite though was how they had brought context to their exhibit – here we see a follicly challenged individual waiting for a bus at a bus shelter – this was a great execution!!!

The picture is slightly dark as the screens were so bright!

This entry was posted on Friday, June 19th, 2009 at 02:56 @164 and is filed under Scuttlebut. You can follow any responses to this entry through the RSS 2.0 feed. You can leave a response, or trackback from your own site.