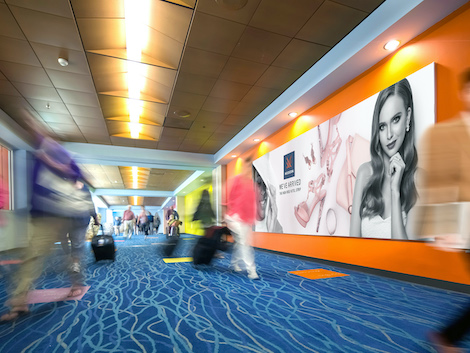 This contract renewal builds on an already robust media program that’s efficiently delivering for advertisers as evidenced by Clear Channel Airports’s ability to grow AAA’s ad revenues by nearly 50 percent from 2014 to 2019. Moreover, this underscores the growth of Clear Channel Airports’s wingspan, including more than 80 competitive airport media concession wins in the last five years, with AAA touching down as the sixth win/renewal of 2019.

Clear Channel Airports will upgrade AUA with the latest digital media and printed displays to help brands capture the attention of the airport’s 2.5 million annual travelers capitalizing on a 6.6% increase in passenger traffic from 2018 to 2019.

Morten Gotterup, president, Clear Channel Airports told us “The new media program at AUA will help local and national brands connect with consumers in even more impactful ways. We look forward to building upon our success over the next five years with AAA.”

In addition to the digital upgrades, Clear Channel Airports will transform existing wall wraps to lit and non-lit tension fabric displays. Both the digital media and wall displays, slated for installation by March 2020, offer domestic and global advertisers the opportunity to engage with coveted frequent leisure and business travelers.

New advertising displays at AUA include:

With its aviation history dating back more than 90 years, Aruba’s air service network has been vital to the economy. And AAA just announced a new expansion project scheduled to be completed by 2023/2024.

Dedicated to airport advertising for more than 45 years, Clear Channel Airports is the premier innovator of contemporary display concepts. The Company, a brand division of Clear Channel Outdoor Americas (NYSE: CCO), one of the world’s largest outdoor advertising companies, currently operates more than 260 airport programs across the globe and has a presence in 28 of the top 50 U.S. markets with major airports.

This entry was posted on Tuesday, December 3rd, 2019 at 09:02 @418 and is filed under DailyDOOH Update. You can follow any responses to this entry through the RSS 2.0 feed. You can leave a response, or trackback from your own site.