Within a week of the trial date being set for alleged fraudsters Outcome Health founders Rishi Shah, Shradha Agarwal, former Outcome CFO Brad Purdy and former executive VP Ashik Desai, the DPAA have announced that Nandini Ramani, Chief Operating Officer of Outcome Health, has joined the DPAA Board of Directors. 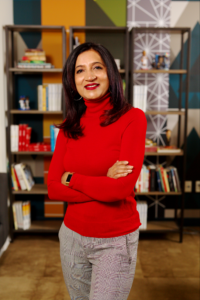 You would have thought that an industry association that has done so much over the last few years for the industry and gained untold credibility due to the hard work put in by DPAA President and CEO Barry Frey, that they would want to steer, well clear from any sort of taint or controversy.

Nandini Ramani was parachuted into Outcome Health by the Outcome Health founders Rishi Shah and Shradha Agarwal back in 2018 when the founders were looking for a get out of jail card (yes, indeed, no pun intended there). Nandini was part of the settlement with their three large investors; Goldman Sachs, Google/Alphabet and the Pritzker Family, ending litigation brought by those investors BUT not ending investigations by the Federal authorities.

I must stress that there is no hint of wrongdoing by Nandini Ramani but to be voted onto the organisation’s Board of Directors at this point in time (or indeed, if ever) is very short-sighted of an association that has done so much good for the industry since Barry Frey took charge.

Barry Frey, President & CEO of DPAA, said in the press release “Nandini Ramani is one of the most accomplished executives in our industry – in any industry, for that matter – and I am thrilled to have her as a member of our board. Her wisdom and counsel will be invaluable as we continue to grow both our association and the industry at large”.

Before joining Outcome Health, Ramani was Vice President of Engineering at Twitter. During her three-year tenure, she owned product strategy for emerging markets and led engineering effectiveness for the social media company’s 1,300-person technical organization. Prior to Twitter, Ramani led the USD 320M Java business unit for Oracle, and previously served as Senior Director of the Client Software Group at Sun Microsystems.

This entry was posted on Tuesday, October 13th, 2020 at 16:52 @744 and is filed under DailyDOOH Update. You can follow any responses to this entry through the RSS 2.0 feed. You can leave a response, or trackback from your own site.