TELUS, one of Canada’s big three mobile companies, has launched a new multimedia mobility advertising campaign, titled ‘Get a jump on life with web to go’. 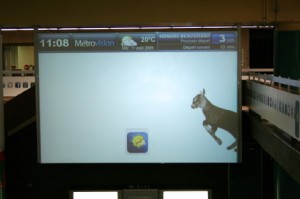 The campaign, which features the first appearance of TELUS’ newest critter, the pygmy goat, shows Canadians the satisfaction of maximizing one’s time by using a TELUS smartphone or Mobile Internet Key to stay in touch with the world more easily – whether by phone, e-mail, text, or on the web, through Twitter, Facebook and more. 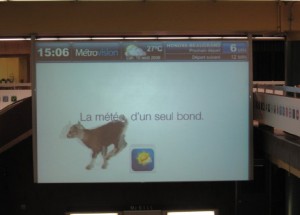 The charming little goats were chosen as a perfect tie-in to TELUS’ ‘Get a jump on life’ campaign, with their tons of energy and their love of jumping around.

“We are all looking for ways to get a little more control of our busy schedules,” says Tammy Scott, vice-president, marketing communications at TELUS. “For busy Canadians who need to stay in touch on-the-go, we offer mobile Internet devices that provide easy access to e-mail, Web browsing, time-saving applications, and more.” 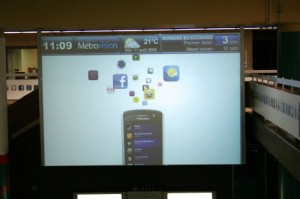 The campaign, in both French and English, includes TV, DOOH and OOH, radio, print, online, direct, in-store, and experiential. The digital signage includes subway screens in Toronto, Montreal and Vancouver, and in Sporting Life retail stores in Toronto and Collingwood, Ontario. There are also mobile ads which are included in the online buy.

Creative is by TAXI with media by Media Experts, both with offices in Toronto, Montreal and Vancouver. TAXI is also in Calgary and New York. 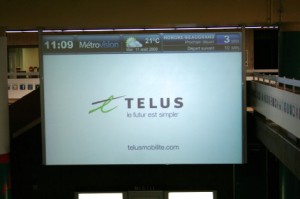 “We have been working with Taxi and Media Experts for a number of years now to develop the strategies behind each of our campaigns,” says JJ Hochrein, director, marketing communications for TELUS. “We have truly developed a close knit creative process and the agencies are considered to be part of the TELUS team.”

This entry was posted on Wednesday, August 12th, 2009 at 10:30 @479 and is filed under DailyDOOH Update. You can follow any responses to this entry through the RSS 2.0 feed. You can leave a response, or trackback from your own site.