Ventuz Technology AG has announced a technology partnership with Outernet Global Ltd. a major new entertainment and immersive media district which is due to open in London later this year. 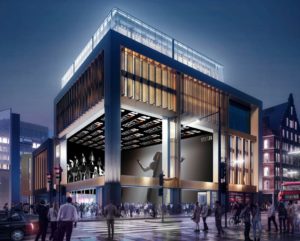 Outernet is described as a global network of immersive media and culture districts designed to provide experiences for entertainment, brand activation and retail. London will kick off a global roll out with further sites planned in New York, Los Angeles, and Europe.

Outernet will feature the world’s first of its kind public atrium – The Now Building – containing an immense digital canvas: a four-storey high, floor to ceiling, 360-degree, 16K screen surface. It is hoped that a daily footfall of 400,000 people are set to experience this new London landmark.

Ventuz CEO Ralf Stanke said “We are truly excited to partner with Outernet Global in making the world’s largest LED screen project in the heart of London a reality with our real-time graphics content creation, authoring, and playout systems. What’s so fascinating about the Outernet is its unique and innovative approach to creating a multimedia experience that lives from its fluid and responsive immediate interactivity with the audience, situational triggers, and the flexibility of an artistic show direction. This mix of sensorial liveliness and editorial freedom can be achieved only in an ultramodern installation such as Outernet by means of complex image processing in real time that goes beyond conventional media server applications managing linear content”.

Mike Whittaker, Outernet Global’s CTO said “What we are building with Outernet is so extraordinary it far exceeds the usual technology solutions. We have developed a best-in-class integrated solution that allows us to work in real-time across LED canvases of 16K that deliver the best immersive experience to our clients and audiences. Ventuz technology is key to enabling us to meet the challenge of large-scale real-time in a way never seen before.”

Ventuz Technology was founded in 2004 by experts from the broadcast graphics and event/staging industries and is headquartered in Hamburg, Germany with offices in Europe, the USA and Asia-Pacific.

This entry was posted on Monday, August 9th, 2021 at 06:38 @318 and is filed under DailyDOOH Update. You can follow any responses to this entry through the RSS 2.0 feed. You can leave a response, or trackback from your own site.