In partnership with MediaCom, EYE in Australia has recreated a mega size phone menu on their Eye Shop digital network. This campaign that we see here commenced August 17 and will run across the five (Australian) capital cities for two weeks so if you are reading this now it’s probably pretty much finished and you missed it. 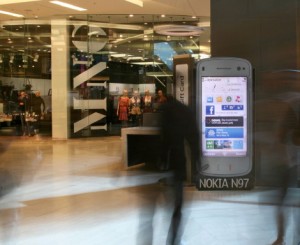 The campaign demonstrates the features of the new Nokia N97 handset via customised (Digital) Eyelites. The Eyelites deliver a live feed from the internet displaying the latest news and weather updates specific to the state. Lovely idea though we think the creative folks could have come up with something a little more interesting than news and weather – hot and sunny anyone?, Ed

In addition to the custom-built units, this campaign combines Portrait and Landscape Digital nationally. The core objectives of the Nokia campaign were to promote the new Nokia N97 and the ability to personalise the handset with content, widgets and applications that are relevant to the user which this particular deployment seems to do rather well.

In addition, Nokia wanted to promote Ovi Store, its one-stop-shop for mobile content and applications.

John McCredie, Nokia Australia’s Head of Marketing told us ”We wanted to maintain consistency throughout the marketing campaign and stay true to the N97’s core proposition which allows people to stay connected to the things that are important to them.”

One of the interesting things about this particular campaign is the intelligence of the creative execution, the flash file is executing locally and running live data from an RSS feed onto the display. The flash file executes according to the schedule, calls the latest data which is supplied via a cached RSS feed, if there is a data interruption the creative still plays and if the data is not changed or restored the media file defaults to a generic display.

This entry was posted on Tuesday, September 1st, 2009 at 09:03 @419 and is filed under DailyDOOH Update. You can follow any responses to this entry through the RSS 2.0 feed. You can leave a response, or trackback from your own site.